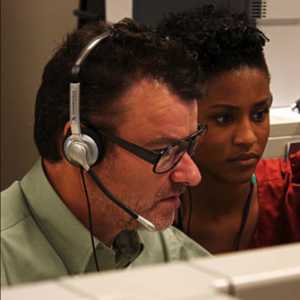 What was the last novel, TV show or movie that made you cry?

John Eldredge says that we should pay attention to when art touches us so deeply that the tears peak out. That’s a big theme in his insightful book, Epic (Thomas Nelson, 2007), how we are wired for story. “There is a heart that God put within you and every story that you love,” he elaborated more on this theme in a Ransomed Heart Podcast, “and everything that stirs you to passion is reminding you of the life that you were meant to live, that you were created to live.”

This is slightly embarrassing to admit, but the show “Undercover Boss” gets me almost every time. If you’ve never watched it, it’s a reality TV show where the jet-setting CEO of a company discards his suit, disguises himself in blue collar working garb and mixes it up with the employees in the trenches to get a feel of what is really happening in the company he or she runs. At the end of the show the CEO’s true identity is revealed and the unsuspecting employees get rewarded for how they performed in the presence of their stealth boss. Great concept.

The first time I saw the show was on a long flight, and that’s when the first tears came, luckily hidden in the hum and darkness of an airplane at night. In that episode, the CEO and president of Directv, Mike White, pretends he is an out of work salesman named Tom Peters who is participating in a special company program where cameras will follow two job candidates around during their training phases in the large satellite TV company. Mike as Tom gets trained by different technicians and service representatives, all of whom evaluate his performance as a trainee.

Phil the service technician shows Tom the ropes and how important it is to go the extra mile with the customer. During a drive from a new customer’s house back to the warehouse, Phil shares about his own escape from drug addiction and his efforts now to serve troubled kids in a youth ministry he leads.

Tom is also coached by a customer service representative named Chloe who seems to always have a positive attitude with frustrated customers while troubleshooting with them on the phone. Over lunch she shares how her background of living in foster care inspired her to want to go into law or business in order help kids also from difficult backgrounds. She does her shifts at Directv to work her way through college.

The dramatic crescendo of the show comes at the end when Tom the trainee reveals that he is really Mike the CEO of their 23-billion-dollar company.

Mike praises a dumbfounded Phil for his excellent training and customer service and rewards him by offering to adopt some of his suggestions company-wide, and even more touching for Phil, gives a personal check of $5,000 toward Phil’s ministry which will enable his youth group to go on a mission trip.

During a follow-up interview Phil quotes from Proverbs: “Do you see a man skilled in his work? He will serve before kings; he will not serve before obscure men” (Proverbs 22:29).

“From the character of how you carry yourself one day you’ll sit among kings and here I am sitting among a CEO,” Phil said. “I feel real good about being rewarded right now for hard work, and the real work that I did, it was recognized.”

Mike also reveals his true identity to a shocked Chloe and raves about her positive spirit even with difficult customers. He announces that Directv is starting a scholarship program for employees and that she will be the first recipient. He also offers to meet with her regularly to help mentor her in her promising career.

Through tears she asks, “Can I give you a hug?”

Something moved me in how these simple people, struggling through their lives and trying to be decent human beings, were honored and rewarded by their bosses in a generous way.

Stories with spiritual undertones touch me the deepest, way more than a revenge motif in an action flick or over-the-tip CGI washes out of your system as quickly as caffeine. Stories with deep spiritual themes stay with us the longest because they are calling to us, as deep calls to deep. I really agree with Eldredge here.

That’s the deeper reason why the “Undercover Boss” episode gave me misty eyes. Believe it or not, you and I are living in a storyline in which our behavior and character will be rewarded by our boss at the end of the show. But he’s like no boss you’ve ever had. He has a true and noble heart, and He is looking for ways to reward you with heaven’s honor. In a previous blog post, The Final Smile, I try to unpack a little bit more the theology and inspiration of being rewarded at what the Bible calls the “Judgment Seat of Christ.”

In the parable of the sheep and the goats, Jesus said that we will be rewarded in whatever way we served the hungry, thirsty, homeless, un-clothed, sick and imprisoned: “The King will reply, ‘I tell you the truth, whatever you did for one of the least of these brothers of mine, you did for me’” (Matthew 25:40).

We have an Undercover Boss. He’s got a sneaky smile on His face and a twinkle in His eye. His name is Jesus and he is impersonating “the least of these” every day, all around us. He is looking for that which He can reward, as He promised: “Behold, I am coming soon! My reward is with me, and I will give to everyone according to what he has done” (Revelation 22:12).

Let this truth move you today, more than just to tears.