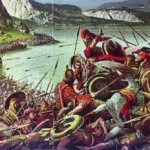 Leonidas at Thermopylae
By Paul Richardson
DO YOU SEE THIS PAINTING? I SPENT COUNTLESS HOURS staring at it when I was a little boy. My dad kept a book about ancient Greece and Rome. From the time I was four or five years old, I would often pull it off the shelf, take it to my mom and ask her to read it to me. As she read, I would lose myself inside the images. This painting of Leonidas at Thermopylae was always my favorite. As I closed my eyes to fall asleep for my afternoon nap, I was the man with the red cape wielding a sword and shield.
In 480 B.C. Xerxes of Persia invaded Greece with a million warriors. All the Greek kings quickly surrendered to Xerxes without a fight. Except one. The Spartan warrior king Leonidas waited for the Persian army at the narrow pass of Thermopylae with his royal guard of 300 men. Xerxes, enthroned on the hills above the looming battle, prepared to enjoy the massacre from a safe distance. Herodotus wrote that Xerxes sneered when he heard reports the Spartan warriors were bathing in the ocean. A Greek slave explained to Xerxes that the Spartans were not simply bathing. They were performing an ancient ritual known as “baptisma” in preparation for their own deaths.  “O king!” the slave said to Xerxes, “Now you are face to face with the most valiant men in Hellas.”
Herodotus wrote that the Spartans fought “with their swords, if they had them, but if not, with their hands and teeth.” On the morning of the third day, Leonidas is said to have told his embattled warriors, “Have a good breakfast, men. We shall dine in Hell!” Hours later, Leonidas was struck down by a Persian arrow. His faithful warriors rallied around his body, enshrouding it with their own until the last Spartan fell defending his king.
A century and a half later, another Greek king advanced across Asia to avenge Leonidas. With 30,000 warriors, Alexander blazed a trail of victorious battles from Asia Minor to North Africa and beyond the Khyber Pass onto the plains of India.
Before he died at 32, Alexander the Great had expanded his realm of influence to an unprecedented breadth. Remnants of his culture and language remain even to this day. Yet, Alexander’s actual “kingdom” disintegrated more quickly than it took him to establish it. Alexander was the ancient equivalent of an entrepreneur who builds a business empire that disintegrates in the months following his retirement. He was like a gifted preacher whose church scatters to the wind soon after he leaves for another assignment.
The secret to Alexander’s rapid advancement and disintegration are one and the same. Like Xerxes, he simply asked for tokens of submission, but left his conquered subjects alone to cling to their own idols and keep their little kingdoms intact. He demanded almost no taxes from his conquered subjects, once even saying, “I hate the gardener who cuts to the root the vegetables of which he ought to cull the leaves.” As Julius Caesar would later say in 47 B.C. “Veni, Vidi, Vici.” (I came. I saw. I conquered.”), none of these men were actual kingdom builders. They were merely sword wielding tourist kings.
Another king was born about three centuries after Alexander’s megastar legacy was enshrined across Greek speaking Asia. As a little boy, Jesus probably lived in Alexandria, the great Mediterranean coastal city Alexander had marked out and ordered built on the North coast of Egypt. By the time Joseph and Mary fled to Egypt, Alexandria was the second largest city on earth, and home to the greatest population of Jews outside of Palestine. Jesus lived his entire 33 years in the ashes of Alexander’s windblown conquests. As a boy studying history, did Jesus ponder his own kingdom? He too, would lead valiant men over deserts, mountain passes and onto distant shores. But Jesus had no intention of forming another paper thin Alexandrian token kingdom that would blow across the earth only to shrivel up and evaporate, leaving a somewhat hollow shroud of rituals, weekly sing-a-longs, religious verbiage and Tuesday night bingo tournaments.
Jesus established a radical kingdom. The word radical is defined as “arising from, or going to the root, or source.” Like Leonidas’ Spartan warriors, his own mighty men would undergo the ritual of “baptisma,” signifying that they were preparing to sacrifice their own lives on behalf of their king.
Jesus is no tourist king. He pursues your heart, sets free your mind, conquers your flesh, and breathes new life into your spirit. His kingdom “cuts to the roots,” setting humanity free, and ruling over all of the cosmos. Jesus alluded to Alexander’s statement about the zealous gardener when he said, “I am the true vine and my Father is the Gardener. Every branch in me that does not bear fruit he takes away; and every branch that bears fruit he prunes, that it may bear more fruit … He who abides in Me, and I in him, bears much fruit; for without Me you can do nothing.” Jesus declared that anyone who does not abide in Him would wither up and be hurled into a fire.
Do you still cling to your own little kingdom? Do you have to have it your way? Must you remain in control? The Kingdom doesn’t work that way. Like Leonidas, Jesus leads his royal guard against impossible odds, commanding us to be baptized in preparation for our own deaths. He said, “Anyone who loves his father or mother more than me is not worthy of me; anyone who loves his son or daughter more than me is not worthy of me; and anyone who does not take his cross and follow me is not worthy of me.”
We are slaves, purchased and set free. Owned by the Author of Life.  Our King.
FacebookTweet