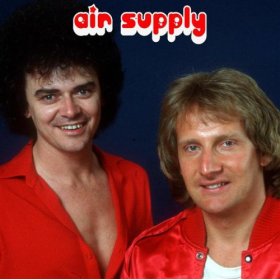 By Mike O’Quin (on his 40th Birthday)

When I was in my pre-teens, the pop group Air Supply was burning up the American charts with their string of love ballads.  I remember listening to their albums (the black vinyl kind, before CD’s) in my big sister’s room and I thought she was so lucky to get to go to their concert when they came to town.  She went with her boyfriend and they probably waved a lighter in the air along with thousands of fans while the Australian duo sang “All Out of Love” and “Here I Am (just when I thought I was over you).”  I didn’t get to go.  I was too young.

I’m not too young now.  I turn 40 today.  And on this monumental day I’m thinking about Air Supply again.  A few years back they came to town for another concert, but this time it was in Surabaya, Indonesia.  I was living there at the time, and as I saw the promotional billboards around the congested metropolis, I thought to myself, “Ah, man, I gotta see Air Supply!  How old are those dudes now?”

I pitched the idea to my wife and some friends and they agreed. “Ah, man, we gotta see Air Supply!”  And then they added, “How old are those dudes now?”

So we purchased our tickets and arrived at the Shangri-la Hotel ballroom with the expectation of a night of magical nostalgia.  Graham Russell and Russell Hitchcock delivered.  Though definitely older, they still belted out their ballads with syrupy gusto.  Sometimes they couldn’t quite hit the very high notes at the end, and the younger base player had to step in and finish out their songs, but overall they still had it.  As far as I could tell they didn’t need oxygen tanks for their own air supply.

As I sat there in the grinning and slightly swaying audience, along with my wife, our newborn son and our friends, I kept thinking to myself, don’t these guys get sick of these songs?  I mean, how many times can someone sing “Two Less Lonely People in the World” without throwing up?   Night after night, in thousands of venues around the globe, they gather the 80’s faithful and stir up those old memories from the skating rink glory days.  Same twelve songs every single night for decades.

Apparently they are very bored of those same old songs.  As the lead singer crooned his way down the aisle that night, looking over the crowd of Asian faces, he noticed a clump of white faces and our cute little baby.  He was in the middle of singing, “All Out of Love,” and stopped right in the middle of his lyrics to chat with us (I’m not making this up):

Russell Hitchcock (singing): “I wish I could carry your smile in my heart/For times when my heart feel so low… (then suddenly talking)…Hi there, what a cute baby.  Where are you guys from?”

Russell (while his partner picked up the rest of the tune):  “Oh really?  I love the states!  I have a house in Los Angeles.”

Russell: “Thanks.  Nice to meet you.”

Russell (singing again): “I ‘m all out of love, what am I without you /I can’t be too late to say that I was so wrong…”

So, yes, they are definitely, positively bored of their songs.  Willing to chat with just about anybody to get out of singing them.  But they have to keep singing them, because the paying fans demand them.  They tried to play some of their new stuff but nobody cared.  Everyone wanted to hear the oldies.  Everyone wanted to go back into those old memories and couple skate again.  Now I’m not really sure if those hundreds of Indonesians in attendance that evening ever couple skated but they sure had all of those songs memorized.

The great thing about walking with Jesus is that He makes all things new.[i]   He is looking toward the future with faith.  With Him you get hope, which I’ve heard defined as “the joyful expectation of the good.”[ii]  Good things are in store for you.  New things.  You don’t have to look to the past and keep trudging up the same tired songs.  He puts a new song in your mouth.[iii]

So I’m not depressed on my 40th birthday.  Why?  Because I’m not all out of love.  I’ve got the blessings of Jesus overflowing in my life and His song in my heart.  Future’s so bright, I gotta wear shades, to quote another 80’s band.[iv]

So my question to you is, are you feeling it too?  Does the feeling seem oh so right?  Oh, what are thinking of?  What are you thinking of? (forgive my corny lyrical ending and post your thoughts below).

[ii] Sermon by Bill Johnson, I forget the title, sorry