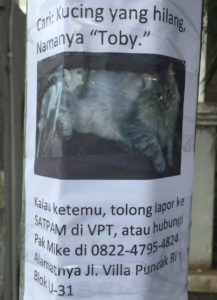 He must have gotten out the night before, when Jordan came home after we had already gone to bed. Our Maine Coon cat Toby often lurks by the front door when someone enters or exits, looking for an easy escape and a chance for adventure. Jordan was distracted getting the keys to lock up the gate, and that is when Toby probably made his break for it.

He’s done that before, gone out on some night adventures, but he has always come back the next morning. Usually I find him hiding under a nearby car. His previous owners, who loved him dearly and had to move back to the U.S., had installed chicken wire around our fence when they gave him to us, fearing he might be able to slip through the fence bars. It worked for a few weeks, but clever Toby figured out the lowest point on the gate to jump right over.

As a result we tried to be diligent to keep him inside when we opened the door, not always easy for a busy family coming and going. But thankfully when there was an escape from “Cat Alcatraz,” as one of my friends called it, he could always be found the next day.
Not so this Thursday morning. I looked up and down the street for a few minutes but had to get to campus to teach my morning class. I came back in a break between classes and looked a little wider and asked a few neighbors. Still no luck.

By late afternoon still no sign, so Naomi and I went around the neighborhood and put missing cat fliers on the light posts. We asked more neighbors. Jordan took a tour on his motorcycle and looked under more cars farther away.

Our social and fluffy cat didn’t come back the next day. And the next.

We went to the local bird market, where people sell cats in some stalls, showed pictures and asked around. We were told by a bird seller to ask in a round-about way…not “Did someone steal my cat and you are trying to sell it?” But more of a “Hey, here’s a picture of a cat that we would love to buy…do you have any of these or no anyone who is selling them?” I practiced that indirect cultural deftness, but still no large grey Maine Coon cats were for sale at the bird market. We exchanged phone numbers with the sellers, went back a second time, but still no sightings. I made a suggestion that we get a new cat at the bird market, to fill that Toby-shaped hole in our hearts, but Naomi gave an adamant NO. How would Toby feel if he came back and there were a new cat in our house?? Good point. Keep hoping against hope.

We prayed of course. We felt a little silly, but we also asked friends to pray as well for a miracle in us being reunited with Toby.

Day 4. Day 5. Stephanie and Naomi took it the hardest…they love that cat so much. I’ve joked before with friends that if there were ever a fire in our house and I was in one end of a hallway and Toby was on the other, and Stephanie had enough time to save only one of us…she would eventually make the right decision but would have to think about it for a second (for the record she doesn’t like that joke).

Day 6. Day 7. Now we are moving into cat grieving stage. I told Naomi probably someone found him, a beautiful rare cat like that, and are either taking care of him and sold him to a family able to do that. Let’s pray that he will find a good home. Her little heart was broken and at the same time struggled with anger…how could someone take our cat like that and not even try to find the owner with fliers up around the neighborhood?

Day 8. Another sad day. Rainy season is in full force, with deluges of rain every day, and we figured there is no way he could make it in the wet and wild. Someone surely must have found him by now. We’ve got to move on…

Day 9, a Saturday. Stephanie, Jordan and I were watching a movie in our living room that evening and Stephanie got up to get a snack midway through. While she was in the kitchen she heard a faint meow, and Jordan joked maybe it was Toby. She opened the door and sure enough, it was! Dirty, thinner and with matted fur, but there he was. He meowed and meowed as she picked him up. Tears of joy in the reunion. Lots of petting and meowing and I-can’t-believe-it’s. Stephanie wanted to wake up Naomi and let her know right away, but I cautioned against it…she had already been in bed for an hour and it would be hard getting her back to sleep. But both Stephanie and Jordan overruled my protest. We went upstairs and put Toby next to Naomi, who woke up with a startle and then unimagined joy. The next morning she would tell us she thought she was dreaming!

Such a happy reunion. Still such shock that our spoiled cat survived in the wild that many days and found his way back home. To us it feel like a miracle.

And now we notice that Toby is not lurking by the door as much to go out on any more adventures…maybe he is convinced he has it pretty good here surrounded by all this love and free food.

I’ve been thinking how heartsick we were when our beloved Toby was lost, and how joyful we were when he returned. Just like that the sadness vanished and the celebration ensued.

It reminded me of parable of a good shepherd Jesus told us in Luke chapter 15:

Then Jesus told them this parable: “Suppose one of you has a hundred sheep and loses one of them. Doesn’t he leave the ninety-nine in the open country and go after the lost sheep until he finds it? And when he finds it, he joyfully puts it on his shoulders and goes home. Then he calls his friends and neighbors together and says, ‘Rejoice with me; I have found my lost sheep.’ I tell you that in the same way there will be more rejoicing in heaven over one sinner who repents than over ninety-nine righteous persons who do not need to repent.” – Luke 15: 3-7

Even in our Case of the Missing Cat episode, I can understand more of the Shepherd’s heart. He is heartsick over that beloved lost sheep and searches diligently until He finds it. He doesn’t just wait for it to come back home (although in our case that’s exactly what happened). The good shepherd keeps searching “until he finds it.”

After Toby came back, we couldn’t wait to tell the people who knew about our missing kitty and who had even prayed for us. We had that same “rejoice with me” feeling.

That’s the way our Father in heaven feels about lost people, those far from experiencing His love. His heart always beats for those still out there, still lost somewhere out in the wild and trying to make their way back. His joy knows no bounds when they are found.

Let’s join Him in that heartfelt quest, not just waiting for them to return, but to go with Him searching… 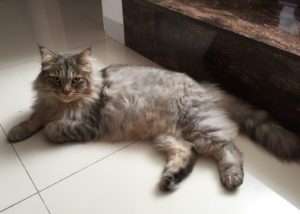 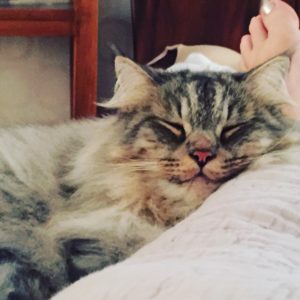