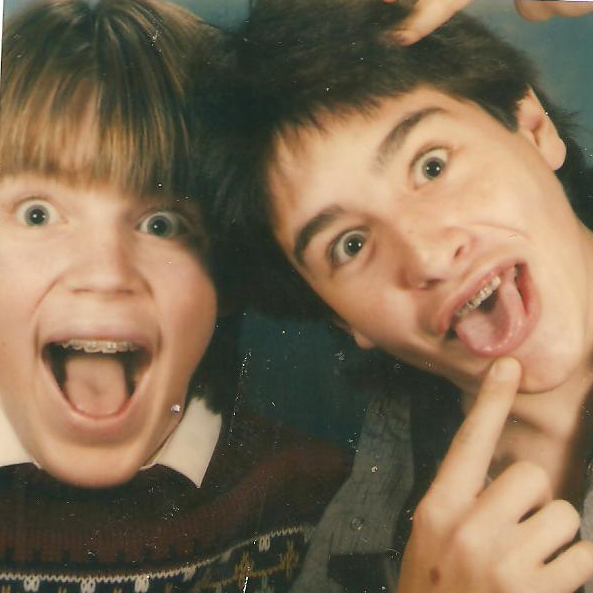 My kids started back to school this week, making me feel nostalgic. Some of that nostalgia is sweet, some not so much. I remember how desperate I was in junior high to get out of nerdom and into popularity, or at least semi-popularity.

Here’s some context first. I grew up happily in a patch of soybean field called Marion, Arkansas. There were plenty of friends to play with and soybean fields to tromp in. Wild and free. When I hit junior high I got to ride my Honda scooter to school on the shoulders of the highway, which was mostly used for large, lumbering John Deere tractors.

One day when I was in the seventh grade my dad came home and announced that he had been laid off, and a few months later I said goodbye to my friends and the soybean fields and my family moved to the Mississippi Gulf Coast. A new job waited in a city named Ocean Springs for my dad along with the scary unknown for me.

Compared to Marion, Ocean Springs was cosmopolitan and sophisticated. I tried to fit in but it was hard as the country bumpkin now living in the big city (population 20,000). One day I rode my Honda scooter to school and I was pulled over by the police and given a ticket for driving without a license or a license plate. I appeared before the judge and held back tears as my mom pleaded for mercy. It was clear I didn’t belong here.

My country fried accent made things worse. In Arkansas my sister and I used to say things like “gol’ lee” and “good gravy” as exclamations. Those were not cool words in Ocean Springs. You know your accent is hopelessly thick when the kids in Mississippi make fun of it.

At junior high I was immediately assigned to the bottom of the food chain and sat with the other bottom dwellers at lunchtime. The geeks were the only people who welcomed me into their gang. My two best friends were both named Thien Nguyen (pronounced Tin Win). They were children of Vietnamese fisherman who immigrated to the Gulf Coast, and like me, they didn’t really belong. But they were decent fellows. Every day I would sit at the nerd table with them and we would encourage each other as we slogged through another day of nerdom together.

From my vantage point as a bottom dweller I could see the other people happily swimming above.  I knew I would never be able to become popular, to sit with the beautiful cheerleaders and the glorious football players, but maybe, just maybe, I could secure a spot with the semi-popular people one day. At this level you would never be voted into the coveted categories of the yearbook’s Who’s Who pages, but you could probably show up at the school dance with a date you wouldn’t be ashamed of.

One day in biology class, my lab partner John Courtney unexpectedly invited me to eat lunch with him. I was shocked. He was a member of the semi-popular set and I felt like I had just been handed a get-out-of-jail free card while sitting on death row. This was my ticket out and for the first time I actually looked forward to lunch that day.

At lunchtime I wasn’t quite brave enough to sit myself down at the semi-popular table right away, so I took my place at the nerd table and waited for the signal from John. As usual Thien Nguyen One and Thien Nguyen Two, as we called them, were being friendly and chatty, but I was distracted, waiting for my discharge. The moment soon came. After John got settled at his semi-popular table, he nodded at me to come on over. Without a word or a farewell, I stood from the table and marched with my tray towards freedom. This was it! Just a few steps away towards semi-popularity…

To my horror, I heard behind me Thien Nguyen One and Two get up from the table too. I turned my head and saw that they were actually following me. The problem was of course that John had only handed out one golden ticket, not three. This was going to be so uncool to show up at the table on initiation day with two my nerd sidekicks. I would probably immediately be rejected and be forced to return to the lonesome losers, with no hope of ever getting out again.

I had to think fast. I quickly got to the table first and sat next to John. I knew the names of the other guys at the table and a few of them nodded at me, as if to say, “What’s up?” John spoke warmly to me, with a hearty “What’s up?” and it was clear that he had invited me in. There were only two empty seats, right to my side, and the Thien Nguyens took their places at those. A collective frown formed around the table and of the more popular guys at the table asked aloud, “Who are these f**s?”

My heart was pounding fast. I had to make the decision right then and there. Would I choose the loyalty of friendship or the possibility of popularity? The decision, I’m ashamed to admit, was way too easy for me at that pivotal junior high identity moment.

With my back turned sideways to both of my faithful friends, and not making eye contact with either of them, I answered the group’s demanding question with a shrug. “I don’t know,” I announced, showing that these losers weren’t with me. My determined eyes stayed focused into the faces of my hopefully new friends, and I could see them giving dirty stares back to the uninvited guests. It was a long, awkward moment and finally Thien Nguyen One and Two both got up, and shuffled slowly back over to the nerd table.

I had made it. Freedom!

FYI, I do feel your hatred for me right right now, so no need to spew that in the comments section. Also please don’t unsubscribe from this blog until I make my point.

Trying to make yourself popular…pretty yucky. People do all sorts of hurtful and twisted things to scratch their way toward just a little bit more popularity.

Now, much later and a hopefully a little bit wiser, I have found a new mission in life. It doesn’t involve hurting people but actually lifts them up. It’s all about making someone else popular in a way more honorable contest.

That person is…and you probably saw this coming…Jesus!

Orient your life toward that popularity contest and honor gets splashed all over the place.