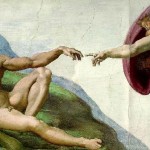 In the closing weeks of World War II, the American cruiser U.S.S. Indianapolis was churning westward in the Pacific Ocean en route to the Philippines.  Just after midnight, an enemy submarine emerged into the balmy air and launched two torpedoes into her stern.  The Indianapolis exploded into flames and sank in less than ten minutes, leaving over 900 American sailors swimming for their lives in the darkness of the open sea.  Some of the sailors who tumbled into the burning oil were able to grab life vests.  Others clung to their fellow sailors and hung on as long as possible.

Within hours the corpses of the dead had become the targets of a feeding frenzy of oceanic white tip sharks.  Eventually the beasts came looking for the survivors.  For the rest of their agonizing ordeal, frenzied sharks circled under their feet, occasionally coming up to maul helpless swimmers.  Over 200 of the men died in the water because of shark attacks alone.  Others died from exposure, sodium chloride poisoning and dehydration.

The tale of these forsaken men, floating in the briny sea for four and half days under the blazing equatorial sun, dog paddling above a swarm of sharks without drinkable water or food, provides us with a rare and lucid glimpse into the inner sanctuary of the human spirit.  In their gripping story, we can almost see the salt water peeling off the inner layers of the human heart like an onion.  The records of the survivors reveal that they experienced en masse the peeling away of the same layers in the same order.  Initially we hear panicky screams of desperation ringing out over the water.  By the second day, mankind becomes his own greatest enemy as fear is overpowered by primal rage.   Chaos breaks lose as men begin strangling and stabbing one another.  In the searing heat of the third day, belief that no one is searching for them begins to metastasize.

Loss of hope immediately triggers widespread symptoms of pathological mental delusion.  The sailors begin to make up their own personal realities, becoming convinced they are in other places and with other people, even swimming into lines to pay for groceries.  Delusion then leads to suicide.  The men begin to calmly and quietly kill themselves.  Dozens of them swim out away from the clusters of life vests into the lonely sea where they serenely lean their faces forward into the water until they drown.  Others untie their life vests, stop swimming, and slip into the depths.

Less than a third of the men outlived their crucible.  With determination to overcome, they refused to surrender their minds or bodies.  These remaining survivors found the place in the innermost core of the human soul where hope resides.  By hope, I do not mean the fast food flicker of optimistic euphoria that people often associate with this word.  Hebrews 6:19 tells us, “We have this hope as an anchor for the soul, firm and secure.  It enters the inner sanctuary behind the curtain …”    Hope is the anchor of the soul.  Hope is the unrelenting expectation that night will be overpowered by the dawn.   Hope is heavier than uranium, and it contains more power than the nucleus of an atom. With hope, spinelessness gives way to certainty, courage, conviction and purpose.

Only those who find their anchors will ever truly live.