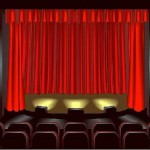 WHEN I WAS AN 8TH GRADER, OUR SCHOOL’S DRAMA TEACHER suggested that I try out for the school play. I signed up and was given a part. My role was to carry a ladder onto the stage, climb to the top, and pretend to change a light bulb. From atop that ladder I was to speak two lines.

WEEKS BEFORE THE PLAY, my imagination began to conjure up disastrous scenarios. I might slip off the ladder or drop it. I pictured myself freezing up, forgetting my two lines, and making a fool out of myself. Day after day, my imagined risk ballooned inside my trembling heart. One afternoon after practice, I told the drama teacher that I wasn’t going to be in the play. With one eyebrow raised, she gave me a quizzical look. After a dreadfully long pause she said it wouldn’t be a problem.

A few weeks later, I sat in the back row of the darkened auditorium and watched my friends take the stage. The play came off beautifully. Meanwhile, I lamented my timidity. I had squandered the chance to share a lifelong memory with my classmates. Even at thirteen, I was overwhelmed with a deep awareness that my life would either be lived sitting in the back row or playing in the light.

In Act II of Shakespeare’s As You Like It, we find the well known line: “All the world’s a stage, and all the men and women merely players.” In one respect, aren’t we all players called into the world? God is our Stage Builder, Set Designer, and Playwright, but he doesn’t give us a chance to review the script ahead of time. Instead, he simply invites each of us to rise up, and advance into the stories he is writing. In our drama, we are not given a chance to memorize or rehearse our lines. We aren’t told who else might appear with us on the stage. Even now, the play has already begun, yet we don’t know when the curtain will close. Nor can we see the cloud of witnesses observing us from the beyond the glare of the stage lights. He assures us that we don’t need to be afraid because he is with us always. In the midst of the story we are simply asked to trust him. Every scene abounds with possibilities. God is there to strengthen us, to guide us through each moment. Our drama is peppered with mysteries, paralyzing dilemmas, antagonistic players, and seemingly irresolvable problems.

When feeling the pressure, some retreat into a vicarious or cynical existence. A few might even throw up their hands in frustration or melt down with anger. Others, however, respond with faith. These people reject the temptation to shrink back. Instead, they trust that there are no accidents or coincidences. God places them in specific moments and circumstances, giving them a chance to rise into his stories. Yet so many of us have intentionally sidelined ourselves from the stories God is calling us into. What is the Spirit of God saying to you right now? How are you responding to the stage he has created for you? Will you shrink away from that stage or take a step of faith into the light?