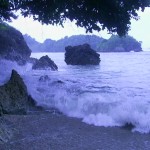 On the south coast of Java this past weekend, I played on a beach that is accessible only by four-wheel-drive vehicles or motorcycles that dare.  I guess the other way would be if you happened to be born in one of the nearby fishing villages and could walk there.

The beach is of course secluded.  Very beautiful and very secluded.  No stores, no beach hawkers selling trinkets, hardly any people there except a few lone fishermen and another jeep full of Indonesians who made their way through the dirt roads to the pristine location.  My son and his friends and I had the beach almost all to ourselves and we had a blast celebrating his 16th birthday together.

Impossible rock formations jutted out of the sea’s horizon.  Gigantic waves crashed against the coral and formed tide pools on the beaches, hiding millions of treasures of tiny seashells.  An overcast day protected us from the brutal tropical sun.  Waves to play in, sand to sculpt, a cave to explore, a fresh water lagoon to refresh ourselves…a perfect day.  I kept thinking, this is so much beauty for just two eyes to take in within the space of just one day.

The next day I found myself, almost automatically, in a better mood.  There was just an extra bounce of joy in my step.  I think some of the stresses of my life got washed away in that rumbling surf and crystal clear lagoon.

There’s something about God’s creation that makes our souls come alive.

I’ve heard it said that the writer C.S. Lewis didn’t feel his day was complete without a walk in the English countryside.  Maybe this was the inspirational source of his creative genius?  I tried in vain to find his exact quote, but I did discover that he would often walk on a picturesque path in Oxford along the River Cherwell called “Addison’s Walk,” named after a famous scholar.

Lewis would frequently stroll on that footpath with fellow writers like Hugo Dyson and J.R. Tolkien who created the Lord of the Rings trilogy.  In September of 1931, he recorded one such walk in a letter to a friend:

“He [Hugo Dyson] stayed the night with me in College… Tolkien came too, and did not leave till 3 in the morning… We began (in Addison's Walk just after dinner) on metaphor and myth—interrupted by a rush of wind which came so suddenly on the still warm evening and sent so many leaves pattering down that we thought it was raining….We continued on Christianity: a good long satisfying talk in which I learned a lot….”[i]

Can you place yourself there on that green footpath, in the company of two creative geniuses, one who imagined Middle Earth and other Narnia, walking along a gentle English river together and talking about art, religion and philosophy until late in the night?  I think the setting must have been important for their creative friendship.  I can’t imagine their creative juices flowing that sweetly at a freeway McDonald’s over a rushed breakfast.

The connection between Creativity and Creation and Creator can easily be missed in our high-tech, fast-paced, as deep as a Facebook status update society.

A curtain opens in Revelation chapter four and gives us a glimpse into heaven.  Before the Lamb who was slain is revealed, the majestic living creatures and honored 24 elders are worshiping the Creator day and night.  What are they worshiping Him for?  His Creation.  From eternity past the elders cast down their crowns and cry out: “Worthy are You, our Lord and our God, to receive glory and honor and power; for You created all things, and because of Your will they existed, and were created.”[ii]

There is a rhythm in heaven that can be heard faintly when we are up close to God’s creation.  We can almost feel the pulse of the elders’ praises when we find ourselves exploring this big green and blue world.  We all long for our breath to be taken away by something beautiful.

How long has it been since your breath was taken away?  Go outside and take a walk today.  Your television screen, computer monitor or wireless gadget won’t do the trick.  You’ve got to crunch some some green grass under your feet, feel a soft breeze in your face, or maybe glimpse a sunset to get to that place of breath-taking awakening.

Lord, we want to gaze on the beauty of Your creation.  Help us make space for this.  Awaken our souls today with all that You have created.  Worthy are You, our Lord and our God.

[i] From “They Stand Together: The Letters of C.S. Lewis to Arthur Greeves,” Walter Hooper, editor, Collins, 1979