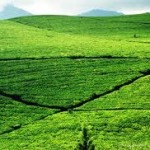 One thing that continually amazes me, after calling Indonesia my home for the last 12 years, is how fertile the soil is on Java.

Fertile is actually an understatement.  Active volcanoes pour their nutrient rich dust on the landscape year round and the rainy season drenches our island for about half the year, the result of which is dust and mud on the city streets and happy farmers in the rice paddies.
Other Asian countries get one or two rice growing seasons a year.  Java gets three. No other place I know gets the benefit of so much equatorial sunshine, rain and minerals, the perfect recipe for wealthy and healthy soil.
The way farmers in villages make fences here (and I am not making this up) is to pound cut branches into the ground next to each other all down a row.   Because of the unbelievably rich soil, new sprouts will grow out of these branches which intertwine with the other branches forming a thick, natural fence.
The trees grow tall and the landscape is lush and green, especially during the dripping wet rainy season.  My sister, upon arriving in Indonesia for the first time on a visit, gawked at all the greenery surrounding her, which stretched upwards to the heavens and marveled, “Man, this place is like nature on steroids.”
Jesus, very familiar with farming, once told a story to spiritually illustrate how important welcoming soil is to growing seed.  The story is only parable that shows up in all three Synoptic Gospels and here it is quoted in Luke chapter eight:
“The sower went out to sow his seed; and as he sowed, some fell beside the road, and it was trampled under foot and the birds of the air ate it up. Other seed fell on rocky soil, and as soon as it grew up, it withered away, because it had no moisture.  Other seed fell among the thorns; and the thorns grew up with it and choked it out.  Other seed fell into the good soil, and grew up, and produced a crop a hundred times as great.”[i]
The only variable in this story is the soil, and there are four types.  The cool thing is we get to choose which kind of soil we will be.  “The seed,” Jesus explained later to his confused disciples, “is the word of God.”[ii]  It remains the same, powerful and constant, and will grow in any soil that will welcome it.
How is your soil today?  Crusty, tough and dry?  Open and inviting?  If your soil is choked with the thorns of the “worries and riches and pleasures of this life,"[iii] as Jesus called them, it’s up to you to remove them.  Get your soil in the drenching rain of His presence and let His words root deep into your heart.  Your life will become more fertile than the soil of Java and will produce even a greater yield.
Lord, make the soil of my heart soft for You again.  Please help me remove all the rocks and thorns that have covered it over for so long.  Drench it with the rain of Your sweet mercy and let your Word go deep into the hidden places of my heart.  Thank You that You make all things new.  Make me new today Lord Jesus.
[i] Luke 8:5-8, NASB
[ii] Luke 8:11, NASB
[iii] Luke 8:14, NASB
FacebookTweet