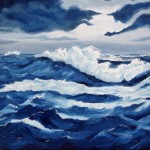 Are You Looking in the Wrong Direction?
Arif’s muscles strained as he worked to control his tiny watercraft. Having paddled out from the beach at sunrise with no intention to go beyond the safety of his village’s harbor, Arif wanted to dive for lobsters, fill his basket, and be home within a few hours so his mother could fix breakfast.
But now, sudden and unexpected gusts of wind tugged at him, pulling him further from the safety of the shore. He would be powerless, having no control where the mighty Pacific currents would take him.
A chill crept up Arif’s spine. A storm of this level of ferocity could easily end his life. If he did not act decisively, he would be swept by the gusts, out from the protection of the peninsula and into deep, dark waters. Arif imagined being lost at sea or stranded on some distant island a thousand miles from home.
All could be lost.
Heavy, low hanging clouds rolled in from the sea, darkening the morning sky, which was usually clear and breezy at this hour. Lightening flashed across the horizon. Clouds grumbled and roared. Waves swirled, buffeted and spun the boat.
Arif knew the harbor well and he had an anchor. He hoisted it up and dropped it over the edge into the choppy sea. Within seconds, it scraped across the harbor floor and caught fast onto something strong. He was in luck. Arif trusted his anchor, knowing he had found a firm grip under a large rock.
The anchor held fast, and later that afternoon Arif was able to ride out the storm and return home, a little bruised and battered, but safe.
Now, my friends, I have a question. The way you answer this question could very well determine your destiny.
What in this story best represents God? Is God the anchor? Is He the rock? Is God the harbor?
Or perhaps, could God be the storm? If so, then what is the harbor? What is the anchor?
FacebookTweet