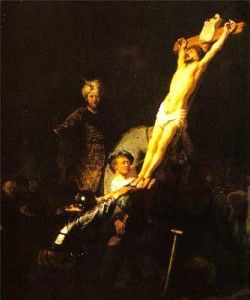 Rembrant's "The Raising of the Cross"

Rembrandt is considered by some to be the greatest of all artists in the history of western civilization. Any way we look at him, he is a timeless giant in the arenas of creative expression. Rembrandt was a master of painting light and blending color. As one looks at a Rembrandt, it is easy to marvel at his talent. Yet we must look behind his paintings, beyond the museum walls into his life. First, Rembrandt and his wife, Saskia, experienced the excruciating death of their two month old firstborn son. Incredibly, a couple of years later they lost another baby when she was two weeks old. Not long after the birth of their third baby, Saskia died from tuberculosis.

It is worth studying the progression of Rembrandt’s creative expression in those years. We begin to see the torments of his soul released into his canvas. Through tears of anguish he painted away from the brilliant rich colors, instead creating art that draws us into deeper waters, into the warmer colors of sadness, even despair. In Rembrandt’s work we see some of the most captivating expressions of the human face ever painted. He became known as the first great artist to ever paint impoverished beggars, street urchins, and slum dwellers. In the eyes of his subjects, we find the search for meaning, the discovery of grace and the renewal of hope. They grasp our hearts and won’t let go. This giant among painters will always be immortalized in our hearts for painting “Raising of the Cross” in which he portrays himself as responsible for crucifying Jesus.

Imagine looking into Rembrandt’s eyes. What would you see reflected there? The most captivating eyes in the world are not any particular shade of brown, green, blue, black or hazel. They are the eyes of any person who has been hammered beneath mighty waves of desperation, only to have an intimate encounter with the suffering, death, and resurrection of the Christ. These are the eyes of an enduring and radiant soul.