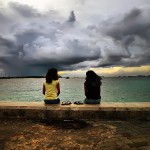 Years ago, I was exchanging emails with a coworker regarding some important decisions in the organization where we both served. This friend and I did not live with the same aspirations for the organization, and our communication was deteriorating from friendly warm to irritatingly chilly; icy enough, that is, to burn a permanent scar into the landscape of our friendship.

Feeling nervous about this downward spin, I went to my brother Steve for help. Steve is one of those rare individuals who consistently offer beneficial advice. His counsel was simple, penetrating and life altering. It has remained with me ever since. “Whenever possible, meet face to face. NEVER use email to communicate about sensitive issues and decisions!” Why? Emails often contain enough information to lure the reader into believing he understands the writer’s emotions and intentions. Most often that is not the case. Like a phantom menace, emails are frequently misinterpreted. Email exchanges regarding sensitive decisions are notorious for deteriorating into bruised feelings and sparking bitter grudges.

Yet as content grows more complex, the dangers of text messages and emails increase. First rate communication is an essential life skill, and those who have the self discipline to ignore the temptation of firing off an email or text message reap the rewards of their time and energy. Effective and clear communication requires attentive engagement, energy, work, love, attention and commitment. Good communication feels like a lost art form, and yet nothing helps two people see eye to eye on an issue better than when they are seeing one another’s eyes. Facial expressions, tones in voices, gestures, crossed arms, a chuckle, a grin, the level of warmth in a person’s eyes, nervous fidgeting, a pause between sentences indicating that a person is thinking carefully … all of these are a part of the depth of personal communication.

God created us to communicate heart to heart, face to face and soul to soul. The same holds true for our relationship with Him. Reading his words is most certainly a great start. And yet Jesus said, “My sheep know my voice. I know them, and they follow me.” (John 10:27) Knowing God entails engaging in communication with Him. Prayer involves communicating with a full heart and thirsty soul. It entails listening, longing, groaning, crying out, expressing our hearts’ desires and dreams.

A commitment to deeper levels of engagement in our communication has implications for ministry norms, and for communicating the Gospel. At the core of Jesus’ ministry style, we find a commitment to intimate conversations with individuals or small groups of people. A few weeks ago, I came across a Tim Stafford interview with Al Erisman, who provides ‘food for thought’ regarding the ever changing role of technology in communicating the Gospel.

Tim Stafford: In the 1980s, critics panned televangelists’ sermons because isolated listeners could not experience congregational life. They also complained that the medium required a flashiness that competed with the gospel. Today video is used to extend a preacher’s reach to multiple congregations. Does real preaching require real presence?

Al Erisman: Television [cannot provide] the worship atmosphere that being physically present does. But if we think of previous technology advancements, the written text of a sermon also lacked this key ingredient. Yet we have seen God bless gospel tracts. I recently talked with a pastor in Nepal who had come to Christ through a tract he found in the street. What is gained by the text (compared with both live preaching and television) is the ability to go back over it and study it. What is gained by the television (compared with print) is some nuance (a frown, a smile, a pause). As we move to e-mail or WebEx conferencing, we see similar pluses and minuses. So it will be when we start using holographic images to present the illusion that we are in the same room with a person.

We shouldn’t think of these technologies as replacing each other. We should think of them as layering to form an effective pattern of communication. Television, Web conferencing, and e-mail should not replace face-to-face communication but rather complement it. A live small group is wonderful and was our Lord’s primary method of discipleship. But he also spoke to large groups. If he had come in the 21st century, I believe he would also have used these new tools, but not to replace the intimate or even large group discussions.

That brings us to the fifth layer, where we consider what technology has done to people. We all see that people have shorter attention spans, read less, and try to do two things at once and get distracted. Churches see both the positive and negative aspects of technology every week. It is great to deal with people who can instantly respond to needs since they are always connected. It is challenging to deal with a congregation that is text messaging in church or gets distracted when the sermon goes longer than 20 minutes.

Following my brother’s advice paid off. Instead of writing more emails, I made a phone call and my friend and I started meeting face to face. The meetings initially did not feel as safe and secure as emails, but they gave us a chance to work together and synergize our visions. Meeting face to face gave us the opportunity to create a win-win solution.

Let’s embrace all the benefits that technology offers. Just as pastors in an earlier generation began using microphones instead of continuing to shout at their audiences, and teachers began to ask their students to read books rather than stare at chalkboards, we must continue to explore the forward edge of technology, searching for new ways to communicate with people who are positioned at greater distance.

Yet, ultimately, nothing will replace the intimacy, warmth and effectiveness of a personal conversation.

To read the full Al Erisman interview, go to