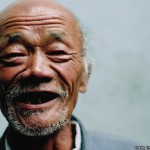 When I served as a youth worker back in California, we asked the kids at our church to give a Saturday a month to serve at a convalescent home. We’d scatter through the hallways, going into the rooms of the elderly, sitting down next to their beds and listening to their stories. We’d often strum our guitars and sing for them.

Out of all the men and women we met on those Saturdays, one person in particular etched a permanent groove in my memory. I never knew the man’s name, but I can still hear his voice sounding like tires crunching gravel. His faded, grey eyes still contained enough hope to reveal a few ounces of determination. He said, “Push me over there.” I happily wheeled him down the white tiled corridor. We came to the end of another hallway. Again, he said, “Turn here.” After a minute, I realized that for him, this wasn’t just a joy ride. He had a destination in mind. “Now, left here.” Soon we found ourselves at the back of the Convalescent Home. We approached the end of a narrow hallway. A sign revealed that this was an emergency exit. Before us were the words, “ALARM WILL SOUND.”

“Okay. Now please just push that door open for me.”

“I’m not strong enough to get the door open! Please, help me. Quickly!” Speaking with determination, he twisted around in his wheelchair and forcefully gripped my hand, “Please! I can’t stand it in here! I don’t want to die in here. They won’t let me out. I want to see the sky. Please let me see the grass and smell the flowers again.”

His eyes bored into mine and he gripped my hand even harder.

“But I can’t just open the emergency exit door!”

When I got home that afternoon, I couldn’t get the man’s voice out of my ears. This week I remembered again the feeling I had that day as I apologized to that man for not being willing to help him escape his dungeon of despair. Having just “celebrated” my 43rd birthday, I am aware that birthdays don’t hold the same excitement as they used to. They are now reminders of the brevity and fragility of my existence. Ah, forty-three. It feels like I’m on top of the mountain. I can see for miles from up here. But there’s only one direction, and that’s down. My life is now on a clear trajectory of demise. No matter how fast I peddle my bicycle, I will never be able to silence the drum beat of time. The stuff I value the most will be torn out of my grasp. My ability to see the faces of the people I love will dim. My ability to listen to birds chirping in the branches of trees will fade. Walking will become more painful with age. There is no escaping it. This dreadful feeling of being chained to time is the reason why society is so obsessed with youth. Look all around. Face lifts. Hair coloring. Anti wrinkle creams. We can’t stand the thought of growing old. Youth is a religion.

Living in Asia for the last eleven years has taught me many, many lessons. Paramount among these lessons is the Asian way of celebrating the aging process. Here, people more naturally embrace all stages of life. With age, most people are not clamoring to reverse the effects of time. The older a person becomes, the more respect is afforded by society. The elderly are honored and celebrated rather than stuffed away into convalescent homes. Their voices matter. They are cherished as vessels of wisdom, vital to the health of the community.

This, to me, feels right.

Kierkegaard writes about living with courage to embrace the fragility and brevity of this life. He sees this courage as the evidence of faith. “The lily’s coming into being becomes its destruction, indeed it seems as if it came into existence and became beautiful only to be destroyed—yet the obedient lily obediently submits to this, it knows that such is God's will, and it shoots up…. A man, or we men, in the situation of the lily would be in despair at the thought that coming into existence and destruction was one thing, and therefore would prevent ourselves by despair from becoming what we might become, though it were but for an instant. With the lily it is otherwise. It was absolutely obedient, hence it became itself in its beauty, it became actually its whole possibility, undisturbed, absolutely undisturbed by the thought that the same instant was its death."