INTO THE Flood (on dry land)

“…and the feet of the priests who bore the ark dipped in the edge of the water (for the Jordan overflows all its banks during the whole time of harvest) that the waters which came down from upstream stood still, and rose in a heap very far away … (they) stood firm on dry ground in the midst of the Jordan; and all Israel crossed over on dry ground, until all the people had crossed completely over the Jordan.” –From Joshua 3

I’m captivated by this story from Joshua 3. For me, there’s a vivid takeaway … God told the priests to step off dry land into the floodwaters before He did anything for them. His miracle would originate from far away and eventually catch up to them. This is a bit different from the crossing of the Red Sea, where God opened up the waters beforehand. The first miracle was designed to bring slaves to freedom. But this was a new generation, ready to take the next step of maturity, to engage in greater battles and mightier steps of faith. This time, God told them to go to a dangerous place and trust Him to show up.

NINE months ago, a group of us were at a New Year's party. Someone asked everyone in the group to share our hopes and dreams for 2012. My throat suddenly started to feel dry. Over the final weeks of 2011, God had been stirring in my heart to take a step of faith in a specific way. He wanted me to follow the path of risk, to step into the Jordan and trust him for the outcome.

Would I have the guts to verbalize the dream in front of this group?

A bit nervous, I started to explain to my friends, “The Teacher Training land has been sitting empty for a few years now. God provided the funds for us to have our dormitory and a few offices, and the program is finally up and running, but the biggest part of our vision is still a vacant lot. I know this dream came from God, and I want to start building our auditorium for our training conferences, the lab high school classrooms, and open an Early Childhood Center there. But I have no idea where the money will come from. I’ve decided to start building it, and we’ll keep building until God stops providing the funds.”

I knew our financial situation, and the decision was nuts. I was going on the hunch that God doesn’t like to start projects and leave them unfinished. A few days later I formed a committee to launch the project. Somehow, in ways that I still don’t understand, and perhaps never will be able to explain, through a combination of generous people here in Indonesia, unexpectedly low prices on some of our raw materials, and inexplicable miracles, the project has moved forward.

Here is the new building (on left) at Back to School Night. 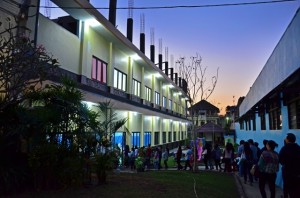 Now we are launching into the third floor, which will be an auditorium with a balcony. The auditorium will seat 350. That auditorium will be used for Re-Imagine Education conferences, held multiple times each year, where thousands of Indonesian teachers will be equipped and inspired. It will also be the site where countless numbers of children and youth hear God’s Word, and lift their voices in worship until Jesus returns.

At the moment of this writing, we’re still way short of the estimated funds to finish this building, but we’re just going to keep pressing forward until God runs out of money. And I’m just laughing as I write this. It’s been awhile since I stepped into the Jordan, getting my shoes wet and trusting God to get me across on dry land. The feeling is amazing. Life is so rich when we are walking God and trusting Him all the way. I’ve never jumped out of an airplane with a parachute, but it must feel something like this. It’s only fitting that in a few days we celebrate Miracle Day for the 13th year (August 12).

Will you celebrate with us? Yes, God is a God of miracles, and He loves to show up when his children rise up into audacious endeavors, where only God can bring us to the other side.