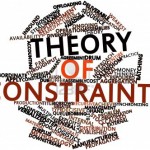 IMPROV IS CREATIVITY ENERGIZED BY CONSTRAINT
By Paul Richardson
Winston Churchill was chided for ending a sentence with a preposition. His answer? “That is the sort of arrant pedantry up with which I will not put.” Oh my goodness! Now there’s a brain that moves like a Ferrari from 0-60 in 1.2 seconds. How on earth could he think of a comeback that sharp, that fast? My own brain accelerates at the speed of a clunky old VW bug. I can sometimes think of witty things to say … about 3 hours after I actually needed them.
This is why the word improvisation terrifies me. I’m the guy who freezes up at the wedding reception when the MC comes in my direction with a microphone. I want to melt into my chair or run for the restroom. My brain locks down. Any trace of a witty or wise comment looks for the first exit out of my head. I mumble something entirely forgettable. Later I feel so embarrassed. Why did I say that? I detest psychological experiments that require me to say the first word that races into my head. I won’t get anywhere near those things.
This is why I am inspired by the improv artists. I’m not so much talking about the people doing comedy on stage. For me, the improv artist is the person who lives life itself at the forward edge of creativity. To understand improv, let’s get a few common misunderstands out of the way.   Improv is not “winging it.” It has nothing to do with a lack of preparation, quickly throwing a presentation together on the fly, sliding into a staff meeting 10 minutes late while straightening one’s tie, or applying makeup in the rear view mirror while racing down the highway. In fact, lack of preparation is one of the greatest impediments to improvisational freedom.
At the heart of improv is the word “improve.” Every day we are faced with unexpected challenges. It’s normal for these moments to feel overwhelming. The improv artist is determined to figure out how to find the raw potential in the challenge so as to improve the situation, making it even better than before. Where someone else might throw up their hands and say, “I quit!” the improv artist advances into the challenge in search of a solution that most certainly awaits him.
Margaret A. Boden, an expert on creativity, wrote that “… constraints – far from being opposed to creativity – make creativity possible. To throw away all constraints would be to destroy the capacity for creative thinking.” Taking this concept to its natural conclusion, then, we find that the greater the restraint, the greater the potential for creativity. Improv is creativity that rises in quality during unexpected moments of resistance, confusion or confrontation. Improv is a creative act when the pressure is on, or there's an unplanned twist in a tight schedule, or a hurtful comment by a co-worker.
Imagine a soccer player who stops on a dime, fakes right, spins around his opponent, then bends a magnificent shot into the corner of the net. Without the opponent on the field, there is no improv. When Magic Johnson used to glide down the court with a basketball, no one in the world had any idea what he was about to do.  Whatever he did usually amazed everyone watching, including his teammates, and his creativity almost always generated baskets. Yet as great as he was, we wouldn't say Magic was improvising unless some other team (preferably the Boston Celtics) was trying with all their strength and ingenuity to shut him down.
Improv is best understood in contrast to static creativity. Static creativity is without constraints. It is seen when a player kicks 100 soccer balls into an empty net. For me to sit down and write an article for FaithActivators.com with a freshly brewed cup of coffee on a quiet Saturday morning is most definitely a creative experience; but unfortunately its only introductory level creativity. If, later in the day, I were to stand before a skeptical audience and masterfully articulate my ideas in response to belligerent questions being flung into my face, that would require lifting my expressions to the improvisational level. Static creativity is hitting a bucket of golf balls on a driving range. Improv is sinking a 15 foot putt against a brisk wind on the final hole in overtime at the U.S. Open in front of a large crowd.
Static creativity is a Sunday School lesson affirming that we should forgive others. Improv is responding graciously when the neighbor’s baseball shatters the kitchen window. Static creativity is worshipping God in a carpeted and air conditioned sanctuary of a church.  Improv is Paul and Silas worshipping God after being stripped, severely flogged and shoved onto the hard, cold floor of a dimly lit jail cell.
The beauty of improv is that it makes the most of the circumstances we find ourselves in. Right here. Today. The improv artist sees a challenge like a kite sees wind. He considers life with all its turbulence and says, “I’ll take whatever life throws in my face, and I’ll use it to elevate my art form, creating something out of whatever comes my way.”
How about you? Can you think of any challenges you are facing right now that could use a little bit of improv?
FacebookTweet