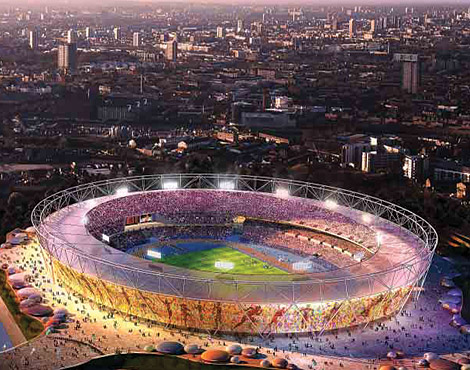 This is really foolish and I’m going to pay for it tomorrow.

It’s 2 AM Indonesia time and I really should be sleeping before a big day tomorrow.  But I can’t help myself.  In exactly one more hour the 2012 Summer Olympics will officially begin at Olympic Stadium in London.   I’m going to stay awake and watch them, no matter the price to my weary body in the morning.  This is something that only comes around every four years, and I ain’t going to miss it.
The Opening Ceremonies are probably my favorite part.  They are saying that 60,000 people will be in attendance, iicluding Queen Elizabeth II who will officially open the games.  More than 80 heads of states will be there too.  The whole world will be watching.
I love watching the athletes stream into the stadium, carrying their flags to represent their beloved nations while the gigantic London crowd greets them.  I like to imagine the hundreds of thousands people gathered around their TV sets in the athletes’ home countries to cheer them on too.
I love how the out-of-this-world ceremony honors the athletes.  This year’s is going to be one-of-a-kind.  Quoting from the LA Times: “The opening ceremony itself is hotly anticipated. Directed by Britain’s Danny Boyle (“Slumdog Millionaire”), the extravaganza is titled “Isles of Wonder” and was inspired by William Shakespeare’s play, “The Tempest.” The ceremony will culminate in a performance by Paul McCartney.”
Wow, what a show!
There is nothing else like the Olympic Opening Ceremonies.  Can you think of anything else that brings our planet together like it?  I can’t either, but I can think of something in the future that will make the Olympic Oscar award winning directed multi-million extravaganza seem like a poorly-acted high school drama in a school district that was facing budget cuts and couldn’t afford any sets or costumes.
Heaven.
That’s right, heaven.
I know, I know, the image that immediately conjures up in our minds is a nice, fluffy place where angels have nothing better to do than strum harps.  If we were honest, it may seem a little bit boring.  John Eldredge in his brilliant book “Journey of Desire” writes about how believers sort of picture heaven as the church service that never ends: “Nearly every Christian I have spoken with has some idea that eternity is an unending worship service… We have settled on am image of the never-ending sing-along in the sky, one great hymn after another, forever and ever, amen.  And our heart sinks.  Forever and ever?  That’s it? That’s the good news?”
Scratch that idea of a white, boring place.  It’s going to be wild and colorful.  How do I know this?  “The nations will walk by its light, and the kings of the earth will bring their splendor into it…. The glory and honor of the nations will be brought into it.” – Revelation 21:24-25
Think of it!  The Creator who imagined the Great Barrier Reef and the Himalayan Mountains and the Grand Canyon and the Amazon Rain Forest is the decorator.  Breathtaking scenery.  The kings of the earth will bring their colorful multi-national splendor into it.  Think of parades honoring Jesus. Every tribe, tongue and nation. Festive flags, traditional dances, lively symphonies and heartfelt songs, a multi-national feast of the senses.  I personally can’t wait to see the delegations from Indonesia come to the party.
That’s what heaven is going to be like guys!  Another picture we get is the wedding ceremony of the ages, culminating at the end of time: “Then I saw a new heaven and a new earth, for the first heaven and the first earth has passed away, and there was no longer any sea.  I saw the Holy city, the new Jerusalem, coming down out of heaven from God, prepared as a bride, beautifully dressed for her husband.” – Revelation 21:1-2
What a wedding party that is going to be!  Prince William and his new wife Catherine would be ashamed to show their wedding pictures there.
Why does the opening ceremony of the Olympics capture our hearts and make us dab the corners of our eyes with tissues every four years?  Because it’s our destiny:
“It was the Unicorn who summed up what everyone was feeling.  He stamped his right fore-foot on the ground and neighed, and then cried, “I have come home at last.  This is my real country.  I belong here.  This is the land I have been looking for all my life, though I never knew it till now.  The reason why we loved the old Narnia is that sometimes it looked a little like this.” – C.S. Lewis in The Last Battle
Okay, gotta run.  It’s 3 AM and I’m not going to miss this…
Related Post: Gold Medal Motivation
FacebookTweet