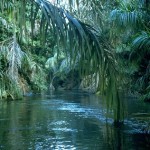 I LOVE IT WHEN CHURCHES send short term workers here to Southeast Asia. It’s our chance to serve those in America who have sacrificed for us to be here. We are committed to giving the folks back home a life-changing glimpse of the world beyond America’s borders. Over the years, we’ve seen some Spirited teams, and one group stands out in recent memory. Led by Pastor Scott Miller from Graceland Baptist Church, one of my most memorable teams drove through a gently falling snow to get to the Louisville airport. Thirty hours later, they were crouched in a motor boat, snaking their way through the dense green jungle in thick humidity and equatorial heat.

As our boat brushed past the vines and tree branches of an island, we were suddenly surprised by an attacking, swarming horde of grey monkeys pillaging our bags for food while hissing through bared teeth. Through the ten days that followed, I was astonished to see how this team rose up creatively to face many challenges and difficulties. Each team member contributed a vital and unique role. As we served one another, our combined spiritual gifts blended to forge an unforgettable and unstoppable movement of love. Each night mosquitoes whined in our ears while we tried to sleep. We slogged through mud. Rampaging rain storms swamped our boat. Day after day, we never knew what we were going to eat or where we were going to sleep. In conditions that would normally reduce me to discouragement and desperation, this team’s spirits kept rising. Each pressure-filled moment was countered with a burst of joyful response.

Each morning, I took the role of scout. As our boat arrived in a village, I jumped onto the shore and sought out the elders to get permission for us to spend the day there. Using their language, I delivered the message God had put in my mouth: “Perhaps yesterday you might have been suspicious if a group of Christians arrived in your village. Maybe tomorrow you will feel the same way. But allow today to be a special day! Let God show you how much he loves you!” Each morning we were received with open curiosity.

John Tackett is an oral surgeon. He and his wife Ginny went to work pulling the rotting teeth out of peoples’ mouths, providing immediate relief from their tooth aches. Jennifer, Juliana, and Leela organized programs for children. Using music, creative arts, and crafts, they showed the children how to make colorful bracelets representing the story of the Gospel. Another group went to work drilling wells wherever people did not have access to clean water. Meanwhile, Jim was encouraging everyone, reviving our spirits, and spreading cheer all around. All day long, we invited the people to come later that night and hear Pastor Scott share the Gospel. By the end of the trip we had seen over forty people respond to Christ.

At the end of their visit I drove the team to the airport. We all felt that we had tasted of what it means for the Body of Christ to function as the salt of the earth and the light of the world. Each of us were so different from one another, and yet only together could we have seen such miracles. I am convinced that it is when the Body of Christ moves into mission that our Spiritual gifts are activated on behalf of God's own purposes. Apostle Paul describes himself as laboring and struggling with all of God’s energy, which so powerfully works in him.[1] It is when we align ourselves with God’s passions and trust in his Spirit that we discover this mysterious energy bursting out from within us. We find ourselves rising, advancing, creating and overcoming the world.