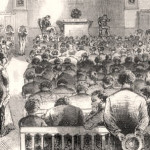 In September of 1857 in New York City, a 48-year-old businessman and lay minister named Jeremiah Lanphier was desperate for a move of God in his city.  Frustrated at the lack of spiritual interest he encountered as he invited people to services at the North Dutch Reformed Church, he walked the streets and passed out flyers for a simple prayer meeting.  On September 23 he opened the doors of his church on Fulton Street for the one hour prayer meeting at noontime.  He was the only one who showed up.

Six months later, The New York Times reported on a great spiritual awakening that had swept the city.  From an editorial on March 20th:

“The great wave of religious excitement which is now sweeping over this nation, is one of the most remarkable movements since the Reformation . . . Travelers relate that on cars and steamboats, in banks and markets, everywhere through the interior, this matter is an absorbing topic. Churches are crowded; bank-directors’ rooms become oratories; school-houses are turned into chapels; converts are numbered by the scores of thousands. In this City, we have beheld a sight which not the most enthusiastic fanatic for church-observances could ever have hoped to look upon;–we have seen in a business quarter of the City, in the busiest hours, assemblies of merchants, clerks and working-men, to the number of some 5,000, gathered day after day for a simple and solemn worship. Similar assemblies we find in other portions of the City; a theatre is turned into a chapel; churches of all sects are open and crowded by day and night.”

What happened in between?

In this audio podcast, Mike O’Quin interviews Shane Harris who has been researching the Fulton Street Revival, also known as the Layman’s Revival.  The testimonies he shares are stunning.  Next week we will dive into the Welsh Revival which took place in the early 1900’s in Wales, and then we’ll have one more conversation on insights gleaned and hoped-for impact for today.

Click below to listen, or search for “Faith Activators” in the iTunes store to subscribe to this podcast.