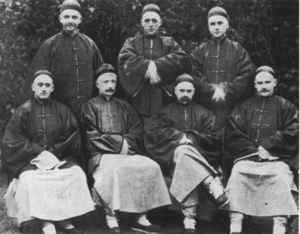 Culture is strong stuff. It’s always bearing down on us, 24 hours a day, seven days a week. We usually don’t realize its shaping effect on our lives until we visit another culture. There we experience “culture shock,” because the way they do things is not the way we do things.

If we lived in that new culture long enough, we would be significantly reshaped. So much so, that coming back to our own home culture, we would experience what is called “reverse culture shock.” Hey, I thought this place was home, but I have changed so much that it doesn’t totally feel that way anymore! That was definitely the case for my family after calling Indonesia home for nearly 14 years, and then returning to the U.S. three years ago.

The culture of this world, warned Paul, shapes us in hidden, sinister ways. “Do not conform any longer to the pattern of this world,” he wrote to Roman believers living in a godless empire, “but be transformed by the renewing of your mind” (Romans 12:2). Unless we swim against the current of our culture (at least the godless parts of it), we will simply not advance the kingdom culture of heaven upon the earth.

As revolutionaries, believers in a non-believing world, it is we who should be shocking the culture, not the other way around. Forward Culture Shock. I don’t mean blaring pipe organ music from our car speakers. I mean forward shocking the earth with the values of heaven. When we see injustice, we shock it with God’s value of justice. The poor we empower. The lonely we set in families. The lost we find. The broken we heal. Fear is met by faith. Generosity marks our lives more than greed. When we encounter the deeds of the flesh, we respond with the fruits of the Spirit. We are constantly at odds with the culture around us, shocking it with our sheer kingdom-culture audacity. Our lived-out kingdom values will cause the world to take a few reverse steps backwards.

Every now and then, a group of revolutionaries shock their culture so much that the world takes notice.

In 1883, a small group of college students in England forward shocked their academic culture. A visiting evangelist named Dwight Lyman Moody came to their campus of Cambridge University in England to bring some revival fire with him from what God was doing in America. As someone who had never graduated from college, Moody was reluctant to visit such a prestigious school but finally was convinced to come. The small group of students who came to hear this backwoods preacher mostly came to mock him. But there were a few in the audience who were riveted by his fiery words, one of them named C.T. Studd. Something Holy Spirit inspired happened to him during the course of those revival meetings, and by the end of the meetings 1,800 students were coming out every night and also experiencing the power of the Holy Spirit.

C.T. Studd, like most of his fellow students, came from the upper crust of English society. He enjoyed his privileged status, riding thoroughbred horses in the English countryside. He also became a well-known athlete on campus. But after those revival meetings he was never the same again. Many of his companions were scandalized that this natural-born leader on campus had gotten “saved,” but he shrugged off their condescending remarks. Eventually Studd influenced a group of them to become as fervent for the things of God as he was. This group of zealots became a cultural oddity on their campus.

Many expected C.T. to rise to the ranks of other famous English athletes, but instead he felt a call to move to China. Out of this band of disciples, seven of them committed together to move to China as a mission team together after graduation, a shock to the system of their sub-culture. How could these seven men throw away their promising lives on a prospect as dim and remote as China?  How could they throw away their promising lives?

They did move to China together upon graduation. They learned a very difficult language. They adopted the clothing of the local people. For ten years they labored there and were effective at reaching Opium addicts and other desperate people of society. They felt through it all that not one drop of their lives had been wasted.

Once C.T. became very ill and was forced to go back to England to recover. Once there, he started sharing the story of “The Cambridge Seven” which inspired countless college students to also give their live to missions. Their inspiring story was credited as one of the sparks that ignited “The Student Volunteer Movement.” On hundreds of campuses, thousands of college students signed a pledge card that read, “I am willing, if God allows it, (to serve Him) in a foreign country.” This volunteer movement lasted for over 50 years and launched 20,500 cross-cultural missionary workers to the nations over the next decades. Shocking!

One mind was renewed. Then many. One culture was forward shocked. And the world was never the same. Not bad for a bunch of thrown-away lives.

The Creation of a Student Movement to Evangelize the World: A history and analysis of the early stages of the Student Volunteer Movement for Foreign Missions, Timothy C. Wallstrom, 1980, William Carey International University, Pasadena, CA