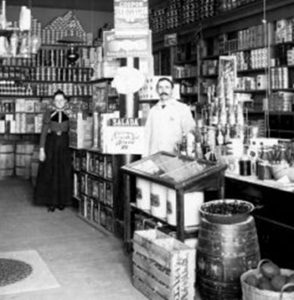 When I was 22 and newly married, I worked as an essay grader for a standardized test that the State of Texas inflicted upon fourth graders. My job was to evaluate, on a scale from one to five, how well 10-year-old students across the state could describe a picture of an old time country store that they were given and instructed to write about (using a number two pencil, of course). I evaluated at least 200 essays per shift along with about 100 other people desperate to find better jobs. After the first week I started keeping count on a little scratch pad how many times the essays would start, “Have you ever wondered what an old time country store looks like?” I very quickly stopped wondering.

The gig was temporary and the pay sub-par, but the job was at least enough to put food on the table, which for us at the time was a borrowed and scratched up end table we used as we sat on the floor and had our meals together. Those were the romantic honeymoon days—not a lot of straw in our nest but there was a lot of love. I enjoyed my home but dreaded my job.

A Bible verse kept my heart alive during those mind numbing work days, and I meditated on it often. It was Paul’s advice to the pitiless people who found themselves under an unfair yoke of tyranny:

“Slaves, obey your earthly masters in everything; and do it, not only when their eye is on you and to win their favor, but with sincerity of heart and reverence for the Lord. Whatever you do, work at it with all your heart, as working for the Lord, not for men, since you know that you will receive an inheritance from the Lord as a reward. It is the Lord Christ you are serving.”  – Colossians 3:23-24

After every last old time country store essay had been evaluated, I got a job as a reporter for a new political magazine in Austin called Politics Today. It sounded a lot more prestigious than it actually was. The editor was an ambitious grad student who studied science but whose real passion was politics. He saved up enough of his own money for his start-up magazine that he would pit against Newsweek and Time. I was all in as long as I got paid (plus there were no old time country stores in the job description).

His limited budget allowed for one full-time reporter (me) and a one-room office in a seedy area of town. Across the street there was an adult book store, and from my office window I could see creepy looking guys going in and out all day. I worked 8-hour days and made a lot of phone calls to get interviews (these were the days before the internet made research much easier). No one had ever heard of Politics Today, of course, so I had to bluff my way through as many interviews as I could get over the phone. I did long pieces on things I didn’t know that much about and that very few people would ever read. My young boss, who only came into the office once a week, mostly complained that my work wasn’t in-depth enough. I felt it unfair for him to have all these expectations while offering no real resources. He hardly ever said a kind word to me. I did enjoy the creative part of the job, but as an extrovert I hated working in an empty office all day by myself.

I kept good ole Colossians 3:23-24 in the top drawer of my desk and pulled it out often to read it, eventually memorizing and personalizing it: I am working not for this unfair editor but for the Lord. I will receive an inheritance from the Lord as a reward for being faithful here, so I will do this job with all my heart. It is the Lord Christ whom I am serving.

I didn’t have to wait until heaven to get a reward from the Lord. Politics Today folded after just three issues and it wasn’t long before a found a much better job, one with a dynamic team of people and exciting new challenges. I loved it and worked there for years.

My true boss was never the State of Texas or an unfair grad student. It was and it is the Lord, and He is a rewarder of faithfulness. He who is faithful in little will be ruler of much, so goes the spiritual principle.

I love my job now. Maybe you love your yours, too, enjoying your co-workers, feeling energized in your work environment and admiring your boss. I sure hope so. Maybe you toil in a place drudgery, obscurity or unfairness. Whatever the case, know that God is watching you. He is watching for that which He can reward. Your sincerity of heart pleases Him, and you will receive a reward directly from His hand which delights to honor. He will promote you as one who has been faithful in little.

It is the Lord Christ whom you are serving.