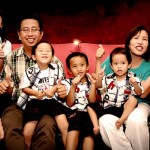 “This is how we know what love is. Jesus Christ laid down his life for us. And we ought to lay down our lives for our brothers.”

For centuries, the people living in villages clustered along the south coast of Java have lived in terror of Nyai Loro Kidul, the legendary Queen goddess of the South Sea. Though her magnificent beaches offer some of the most picturesque white sand on the planet, her waters are no place to frolic. Encounters with great white sharks are commonplace. Coral reefs abound with poisonous sea snakes. Unpredictable currents, thunderous 20 foot waves and merciless riptides kill dozens of unsuspecting and naïve swimmers every year. Mention to virtually any person in Java that you are visiting the south coast and you will hear the inevitable warning, “Look but don’t touch! Never go in the water!”

Clearly aware of the menace posed by the ocean, Isak Timoteus arrived with his wife Ruthy, their five children and a few family friends on a remote South coast beach last Friday morning. He parked, reminded his children not to go near the water, and walked onto the beach to find a shady place to enjoy a breezy day together. Suddenly Timo noticed a group of people standing along the shore. Three young women had been swept into the waves and were screaming for help.

Timo never hesitated. He shouted to a teenager, “Run to the village to get a canoe! Find someone to come get us!” To another he shouted, “Make sure my children stay away from the water!” With that, Timo, who is a strong swimmer, sprinted to the water and dove into the waves to save the lives of three complete strangers. Another man, who was engaged to be married to one of the young women in the water, followed Timo in.

From this point, it is not clear to me exactly how the next hour unfolded. Villagers ran onto the beach but vowed they would never go in that dangerous water. Two of the three of the women were saved. But Timo, the other man and his fiancé, exhausted from battling the riptides, were sucked under and drowned in the waves. A half hour later their bodies washed ashore.

The news of Timo’s drowning sent shock waves through our city over the weekend. Not a person was surprised that Timo would unhesitatingly risk his life on behalf others. After all, Timo had made a habit of sacrificing himself on behalf of others. A decade earlier, Timo felt the call to resign from his prestigious position as a high level manager in a pharmaceutical company to devote his life to full time youth ministry. Passionately burdened to win the souls of youth to Christ, Timo sold his house, entered seminary, and led his wife and children on a journey of faith. Living on the edge of poverty, Timo devoted himself to sharing the Gospel with teenagers, offering counseling and doing everything in his power to serve them.

Over the next decade, Timo’s name became frequently mentioned in the testimonies of hundreds of people. The day I was introduced to him, I immediately I sensed that here was a man I wanted to emulate. His humility was so refreshing. His passion to seek and save the lost was radical. Inspired by his relentless determination to serve youth, I decided that I would do all I could to support his dreams. Mustard Seed joined with Timoteus to open the Malang Youth Center (MYC). Over the years, MYC has impacted the lives of hundreds of teenagers from the eleven high schools in our city. The ministry offers counseling for youth, outreach programs, evangelistic events, and intensive discipleship.

Last Wednesday, I met with the staff of the Malang Youth Center for one of our weekly leadership training sessions. We studied Acts 20. In this passage, the Apostle Paul meets with the elders in Ephesus for the last time. Upon hearing that they will no longer see him, the elders “fell on his neck (NKJV) and wept.” I shared with the leaders that love is the basis for all Christian ministry. I asked them to take few minutes to ponder the question, “if the youth that you are serving heard that they will never see you again, would they shrug their shoulders, or “fall on your neck” weeping?

That conversation was the last time I would ever see Timo alive on this earth. In my heart, the theme of the Bible study holds near prophetic significance. Not just dozens, but hundreds of youth or adults who had been impacted as youth, are weeping for his loss.

I was asked to preach at Timo’s funeral last night. It was one of the most difficult messages I’ve ever given. How could my words possibly capture the limitless and enduring impact of this man’s amazing life? In my talk, I pondered the question, In the echoes of his death, what would Timoteus ask of you and me? I am convinced that he would ask us to repent and follow Jesus with all our heart, mind, soul and strength. He would ask us to carry on his ministry to youth. And, he would most certainly ask us to take care of his beloved Ruthy and their five children, Sasa, Noel, Justian, Teo, and Paul.

With this in mind, would anyone out there be willing to send in a sacrificial donation for this man’s family? I can verify that Ruthy and the children have been left with next to nothing. Timo spent his adult life giving everything away! What will it be like for Ruthy to raise Sasa and the four boys alone? What will be the cost over the next decade?

Imagine if we could combine our resources to purchase them a small home. Would you consider being a part of this dream? Perhaps through our combined generosity, God will provide a home for Ruthy and the children.

In solidarity. In compassion. In Christ.