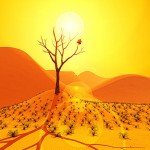 Zoltan Dani is now the owner of a tiny neighborhood bakery in a sleepy village North of Belgrade. But Mr. Dani did not always enjoy such a peaceful and anonymous life. He happens to be the genius responsible for inventing a technological innovation which allowed a Soviet made missile to shoot down a US F-117 stealth fighter in May of 1999 over Serbia. The pilot escaped, but the billion dollar aircraft fell out of the night sky and was smashed into a zillion broken pieces across a field. "We used a little innovation to update our 1960s-vintage SAMs to detect the Nighthawk,” Mr Dani told USA Today in 2005. His innovation involved tinkering with electromagnetic waves.

I vividly remember reading about the downing of that Stealth fighter. On the front page of the L.A. Times there was a photo of Serbian farmers dancing on the broken wing of the world’s most technologically advanced aircraft. But what struck me most is what happened a few days later.

On May 7th, four U.S. cruise missiles simultaneously struck the Chinese embassy in Belgrade from four different directions, annihilating the building and killing everyone inside. Hmmmm. Could there be a connection with the downed stealth fighter?

Yes, obviously.
Although President Clinton apologized to the enraged Chinese government, and CIA officials claimed they had been using outdated maps, (Ahem, yeah right.) we can easily surmise about what really happened. The Chinese government, which for decades had been spying on U.S. military technology, pounced on the downed plane, paid off the locals for its parts, and trucked them to the Chinese embassy, storing them in the basement. No doubt U.S. satellites picked up the whole thing.
After all, China is the world’s foremost nation of knockoffs. I see plenty of them here in Indonesia. Fake Blackberries (called “Blueberries”). Fake Yamaha motorcycles and knock off laptops. The Chinese economy is making a killing off of imitation. They are the geniuses of the clone wars.
Look all around. There are creatives and then there are immitators. Originals and clones. There are forward thinkers and others trying to catch up. Kids who are ready for their exams, and those who look over the shoulders of their classmates for answers. There are pick and rolls, and then there are cherry pickers. Original sermons, ideas, books, plot lines and copycats.
I’ve been noticing something lately about God and the Bible. God never does the same thing exactly the same way twice. Only one Jericho. Only one kid kills a giant with a sling. And that kid refused to wear another man's armor. He killed the giant his own way. His God is the ULTIMATE CREATIVE. God never resorts to the knock off. His creativity is always new. Always fresh. Always a new song in the morning. A new WORD from his Spirit.
Can you get a feel for where I’m going with this? Take a fast growing church, for example. It was a movement. Powerful. All God. Holy Spirit. Miraculous. Ridiculously unexplainable. Only God got the glory. Sort of. Until an army of pastors of smaller churches swarmed around asking, “How did you do this?” “What is your secret?” Strategy? Technique? Methods? So the church threw conferences. They charged a fat little entrance fee. They used media, power points and stood behind microphones explaining their methods, and they went home and tried to imitate what they heard about. And of course that’s when the movement died.
How about you? Did you know there’s no one else anything like you? Seven billion people walking the earth, and there’s only one you. Why? Because the ARTIST made you, and the ARTIST only makes originals. He also has original ideas for you every day. He has a totally unique way for you. No more trying to be a knockoff. It’s fake, and everyone around can smell imitation. Be you. Listen to God. Be the person He made you to be.
An original.
FacebookTweet