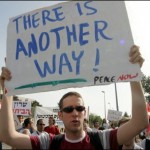 David McCullough’s masterful biography John Adams gives us a raw look into the relationships between the founding fathers of America.[i]  John Adams and Thomas Jefferson were united in their fight to establish the new nation and were the most responsible for crafting the Declaration of Independence together.  However, the two intellectual giants soon became bitter rivals as two political parties fought for the direction of the new government.  Adams defeated Jefferson by a mere three electoral votes to become the second U.S. president.  In 1800 Jefferson returned the favor and defeated Adams to become the third U.S. president.  On the day of Jefferson’s inauguration, Adams found a good excuse not to attend the celebration and fled the new Capitol City in his carriage.

The tension lasted well into the two founding father’s retirements and greatly troubled their mutual friend, Dr. Benjamin Rush.  He urged these two aging political giants to put the past behind them and begin corresponding again.  He once shared with Adams a dream he had in which he found a future history book of the United States.  In this book he read how the country was strengthened because these two men had reunited after Adams began corresponding again Jefferson in 1809.

Adams laughed off the dream and the icy silence continued between Jefferson’s estate of Monticello and Adams’ Stoneyfield.  But Rush kept at his peacemaking mission.  In Christmas of 1812 Rush carried personal warm wishes from Jefferson  to Adams and wrote, “And now, my dear friend, permit me again to suggest to you to receive the olive branch offered to you by the hand of a man who still loves you.”[ii]

On New Year’s Day, 1813, as if to almost fulfill the prophetic dream, Adams wrote a cordial note to Jefferson wishing him well and offering a book.  “A letter from you calls us recollections very dear to my mind,” Jefferson replied.  “It carried me back to the times when, beset with difficulties and dangers, we were fellow laborers in the same cause, struggling for what is most valuable to man, his right of self-government.”[iii]  The ice thawed and two men’s final days were filled with warm friendship and frequent correspondence.  They both died on the same day, on the Fourth of July, 1825, within a few hours of each other.

Is that a spectacular ending or what?  I will say though that happy endings after bitter disputes don’t come easy.  If you are struggling in head-to-head combat with someone else, you may need to pull in your own Dr. Benjamin Rush into the battle zone.  Or maybe you could become one yourself for two estranged friends, relatives or co-workers.  The Son of God gave a pretty high compliment for such as these: “Blessed are the peacemakers, for they will be called sons of God.”[iv]

In this series of “Authentic Community” blog posts we’ve been looking at how our communities can become more vibrant and more life-giving when members are willing to vulnerably share themselves and to engage in healthy conflict with each other.  The best environment for healthy conflict is in private, “just between the two of you,” as Jesus said. “If he listens to you, you have won your brother over.”[v]  Heaven applauds.

Sometimes though it doesn’t work that way and then we proceed to level two: “But if he will not listen, take one or two others along…”[vi]  We usually talk to all sorts of third parties before we sort it out with the second party because it’s easier to gossip about the issue and we feel vindicated afterwards.  But the Biblical wisdom is to go to step two before step three.

I was once called in to be an arbitrator between two very godly ladies who came into great odds with each other.  It reminded me of the verse from Philippians, “I plead with Euodia and I plead with Syntyche to agree with each other in the Lord.  Yes, and I ask you, loyal yokefellow, help these women who have contended at my side in the cause of the gospel…”[vii]

I tried my best to be a loyal yokefellow and met with both of them along with their husbands.  The offense between them had eroded their friendship so deeply that they could not be in the same room together without spewing each other with hurt and accusation.  After just a few minutes of talking it through and a touch from the Holy Spirit, they were forgiving, crying, hugging and affirming their love for each other.   They just needed a safe environment to work it out and a third party can help lay out the ground rules for that to happen.

The Holy Spirit was all over that because God is all into this.  The theme of unity flows through Jesus’ last prayer in Gethsemane before he surrendered to the cross.  He prayed for his future followers, “that all of them may be one, Father, just as you are in me and I am in you.”[viii]  I believe God is intent on answering His own prayer, that we conflict-prone and easily fractioned people would be brought to “complete unity.”[ix]

Are you desperate for real community?  You’re so tired of shallow chit-chat and you want something real.  Or maybe your heart has been bruised by conflict and you have retreated to shallow waters.

You’ve been playing it safe.  No wonder you’re so bored.

Open up.  Share your true heart with a group of comrades.  Bring yourself to the light and experience an intimacy of friendship that you’ve never dreamed of.  “But if we walk in the light, as he is in the light, we have fellowship with one another…”[x] The Greek work for fellowship is koinōnia and it’s good stuff.

Bring it up.  That little issue has been needling you, that has been causing you distress over the how and what was said, that is isolating you from that once close friendship…time for a difficult and private conversation.  The intimacy of true koinōnia awaits you on the other side of that foreboding wall of conflict.

Help them out.  Do you have two friends or relatives hunkered down on opposite sides of a demilitarized zone?  Offer yourself as a peacemaking envoy.  Don’t take sides but be for both of them.  Create the space for koinōnia to be restored.  You’ll feel the affirmation of Jesus and the appreciation of heaven.