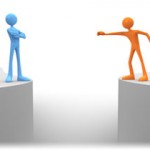 In my last few blog posts we’ve been looking at how vibrant community comes when members are willing to risk vulnerability and engage in healthy conflict.   Last week we looked at conflict’s out-of-bounds areas, and now we’ll focus on the rules of the playing field.

When to have conflict?

The short answer is when you just can’t let an offense slide.  My rule of thumb is simply you need to bring the issue up if it is affecting your relationship with that person.  Give grace when you can, but truth when you must.  Are you avoiding that person, tiptoeing around them at work, not making eye contact at team meetings?  Then it’s not passing the “grin and bear it” test.  You’ve got to deal with it.  Of course there are two sides of an offense, the offender and the offended party.  Who takes the first step?

1) If you are the offender, the responsibility is on you.

Jesus gave us this admonition: “Therefore, if you are offering your gift at the altar and there remember that your brother has something against you, leave your gift there in front of the altar. First go and be reconciled to your brother; then come and offer your gift.”[i]

Several times I’ve had a nagging feeling that something I said may have offended a friend.  When I bring it to them they are usually so glad I came forward to apologize because it was really was bothering them and they are quick to offer forgiveness.  I’m coming to trust that “nagging feeling” as the Holy Spirit and I know I make a bee line from the altar to my offended friend.

2) If you are the offendee, the responsibility is on you.

I remember avoiding a key person on my team over the icy way he was treating me.  Once in a meeting he corrected me in a curt way, which embarrassed me in front of the other staff members.  It wasn’t what he said, but how he said it.

At first I blew it off, but then later that night I had two dreams about the offense.  Okay, I thought, I have got to bring this up.  It wasn’t passing the “grin and bear it test” and I knew this issue was affecting a working relationship and friendship with a key leader on my team.

He was eating biscuits and gravy when I came into the office the next morning.  As I saw him the frustration rose up in of how harshly he had talked to me at our staff meeting, plus his curt text message the night before.  I felt like pouring the gravy on top of his head.

After some initial chit-chat, I invited up him into my office.  “There’s something we need to talk about.”

I didn’t want him to feel like he was going to the principal’s office, so I immediately offered what I’ve heard called “the grace sandwich.”  It’s one slice of affirmation, followed by the meat of the correction, and lastly another slice of affirmation.

“Chad, I really appreciate you and how you are running our office.  You are doing a great job.  But because I value our relationship, and not just your function here, I need to talk about how you talked to me yesterday…”

We got to the heart of it, a silly little issue of misunderstanding, and I took the vulnerable step of sharing how I felt about it, not just how he was wrong.

From his tense body language I felt like the risk of this conversation wasn’t going to pay off.  I was getting the message loud and clear that he thought I was being too sensitive.

“So you’re saying I have to sugarcoat everything?” he countered.

“Huh?  You are missing the nuance here.  Is there some filter in our communication?  Are you frustrated at me for something else? It really feels like that way to me.”

Actually there were a few things and he shared them all.  Guilty as charged on each point.  He had the right to be frustrated for me breaking some agreements we had made as a team and going off and doing my own thing without conferring with them first. I apologized.

As the chip dropped off his shoulder, everything in his body language relaxed.  Now we could really talk.

I agreed to try to repent from the attitude of “the rules don’t apply to me,” and he agreed to try to talk to me with more respect when was frustrated.  We also added an addendum of no more text messages or emails or Facebook posts when there is an issue, but to try instead for a face-to-face meeting.

“Chad, there are probably going to be a lot more issues,” I promised.  “I am going to break our agreement, even though I don’t mean to, and you are going to have to come to me in person.”

Knowing me, he laughed.  And knowing him, and what a big deal consistency means to him—for my words and my actions to match— I told him I would truly try to work on this issue in my life.

I gave him one final affirmation, about me appreciating all that he brings to our team, and we high-fived each other.

We tackled the day’s challenges together and they felt a lot less challenging.

I so appreciate when people come on their own and say, “Hey, sorry for what I said yesterday.  I didn’t really mean it.”  But my experience has been that seldom happens.  A lot of times people don’t realize how they have offended us.  The onus is on us to go to them.  Which means…drum roll please…there is no room for “victims” in the Body of Christ.  This is too important to God.  Whether you are playing offense or defense, you have to “keep short accounts” with your brothers and sisters.

Finally, here are some practical suggestions the right way to bring up a wrong suffered.

In love.  When you approach someone with a sensitive issue, they are immediately going to feel the fear of rejection.  I’ve found a good way to put that fear to flight is something I’ve already mentioned, the “grace sandwich.”  It sounds something like, “I appreciate you and value our friendship so much that I wanted to bring this up…”  After you talk about the meat of the issue, you offer another warm slice of affirmation.

With humility. Then you bring it up, adding a dose of humility.  “I could be wrong here…”  Use the word “I” a lot.  “I have been feeling lately…. (as opposed to “You are being a jerk).”  You want to show that you have a limited scope on the issue—you’re not omnipotent God bringing judgment on them.  From your perspective you honestly could have perceived it wrongly.  Jesus said to go to your brother when they sin “against you,” not just when they generally sin.  Tell them how what they did or said came “against you” personally.

In private.  As Jesus said, it’s first “just between the two of you.”[iii]  The Indonesians call it a “four eyes” conversation.  Just two sets of eyes, working out something difficult and complex.

Right time and space.  Find a non-distracted, private spot for your chat.  I once brought up an issue with a teammate while we were standing in line at a buffet in a very crowded meeting.  She felt ambushed, started crying and quickly shut down.  I had to later apologize for my poor timing.  I wanted to get the issue off my chest so much I wasn’t considering her feelings at all.

But be careful you timid bunnies, there will never be a perfect time.  In fact the longer you wait the harder it is deal with the something.  There is a balance here.

For my last blog post on this issue,  sometime next week, we’ll look at when to bring in a third party when two people can’t work it out on your own.  Stay tuned….