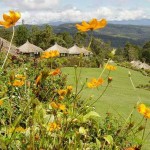 IN THE SUMMER of my 21st birthday, I adventured to the damp outpost of Koropun, in the magnificent highlands of Irian Jaya. Those were the most significant two months of my entire life. Each morning, my friends and I rose up out of bed at 5 am, ate a quick breakfast and went outside to gawk at the towering, breath taking, rugged mountains and breathe in the crisp air. Our primary task was to complete the construction of a church. We had to work fast, knowing that at about noon, dark storm clouds would come rolling up the valley and bombard our village with intense rain, sending every one of us running indoors. The afternoon rain would often continue through the cold nights.

After only one day trapped indoors, the battery of my Sony Walkman died. Without any music, I had to find other ways to occupy my restless nature. The rickety, little wooden house where I was staying held a small stack of books, which I plowed through in a few afternoons and evenings. Eventually, all I had left to read was a King James Bible. (I had forgotten to bring my own Bible.) Like a modern day Robinson Crusoe stranded on an island, I reluctantly picked up that Bible and began to read and memorize it. I spent the next eight weeks immersed in that Bible for probably six to eight hours a day. I would never be the same. Experiencing God's Word with that level of intensity was like rebuilding my soul.

Today, I was sent an article that flooded my heart with memories of those two months in Koropun. Please take a moment to read it.  While reading the article, I was reminded of one of my favorite verses in the Bible. Isaiah 60:1-2 says, "Arise, shine; for your light has come, and the glory of the LORD has risen upon you. For behold, darkness will cover the earth. And deep darkness the peoples; but the LORD will rise upon you. And His glory will appear upon you."

And to Stan Dale and Phil Masters. Your legacy will never be forgotten.

God's glory has most certainly appeared upon you.