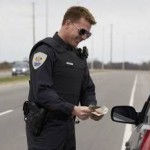 The outlandishness of God’s grace is well described in an analogy I heard years ago which differentiates between justice, mercy and grace.

Justice is getting what you deserve.  A police officer pulls you over for speeding and gives you a ticket.
Mercy is not getting what you deserve.  A police officer pulls you over for speeding and gives you only a warning, no ticket.
Grace is getting what you don’t deserve.  A police officer pulls you over for speeding and gives you a $100 bill, then says have a nice day.
That’s outrageous!  But that’s exactly what God’s grace is.  He doesn’t treat us as our sins deserve, not even close, but instead lavishes His favor on us by the bucket load.
King David was overwhelmed with gratitude when God revealed to him that not only would his kingdom be secure but that it would be passed down to his descendants.   David’s response shows he doesn’t feel entitled to God’s generous favor:  “Then David the king went in and sat before the LORD, and he said, “Who am I, O Lord GOD, and what is my house, that You have brought me this far? And yet this was insignificant in Your eyes, O Lord GOD, for You have spoken also of the house of Your servant concerning the distant future. And this is the custom of man, O Lord GOD. Again what more can David say to You? For You know Your servant, O Lord GOD!” (2 Samuel 7:18-21, NASB).
When Viktor Frankl and his fellow prisoners were released from a Nazi concentration camp in the last days of World War II, their responses ranged from elation, joy, disbelief, numbness to anger.  Frankl remembers one prisoner who was ready to exact revenge on his enemies:  “I can still see the prisoner who rolled up his shirt sleeves, thrust his right hand under my nose and shouted, ‘May this hand be cut off if I don’t stain it with blood on the day when I get home!’” [i] The man wanted to settle the score for all the abuses he had endured for years.  Understandable.
But Frankl’s response was different.  Somehow his overwhelming gratefulness to be free eclipsed all desire for revenge.  For years in the concentration camp the good doctor showed kindness to his fellow prisoners and treated their maladies with his limited resources.  That tender heart beats through a powerful book he wrote about his experiences entitled Man’s Search for Meaning.
My favorite story from the book gives an intimate glimpse into Frankl’s gratitude toward God upon being released: “One day, a few days after the liberation, I walked through the country past flowering meadows, for miles and miles, toward the market town near the camp. Larks rose to the sky and I could hear their joyous song. There was no one to be seen for miles around; there was nothing but the wide earth and sky and the space. I stopped, looked around, and up to the sky-and then I went down on my knees. At that moment there was very little I knew of myself or of the world-I had but one sentence in mind-always the same: ‘I called to the Lord from my narrow prison and He answered me in the freedom of space.’ How long I knelt there and repeated this sentence memory can no longer recall. But I know that on that day, in that hour, my new life started.” [ii]
I want to kneel with Frankl in that meadow and offer my thanks to the God of heaven for my release and freedom.  He delivered me from a narrow prison, too.  I never want to feel entitled to God’s offer of forgiveness through the death of his Son.  What a privilege to be the recipient of His mercy and the beneficiary of His favor!  I want to say humbly with David, “Who am I, O Lord GOD, and what is my house, that You have brought me this far?”  That attitude of extreme gratefulness is where new life starts.
You know me and know what I deserve, O Lord, yet You have lavished on me Your outrageous, unmerited, generous, amazing grace.
No speeding ticket!  One hundred bucks!  Have a nice day.
— Mike O’Quin, author of Java Wake and Growing Desperate
[i] Viktor Frankl, Man’s Search for Meaning, 1992, Kindle Edition, Location 994
[ii] Ibid, Location 978
FacebookTweet