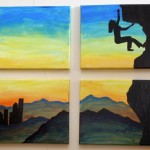 By Faith Wilson
I stared up the towering wall of limestone before me. The thought of scaling it was daunting. I watched in awe as person after person in front of me carefully clung to seemingly invisible nooks and crannies that allowed them to slowly and steadily ascend the vertical mass.
It was my turn to step up to the challenge. First a foothold; then a grab. With each grasp of the rock I gained momentum and height, conquering that which had seemed impossible. My muscles began to burn. One step at a time. With a rush of adrenaline, I reached higher. The pressure increased. My hands were sweating, but there would be no turning back. It wasn’t just the top I anticipated–no–every clench was a shot of pain followed by a douse of joy.
Hanging over open space, I was tempted to look down. Instead, I stole a glance at the panorama that encircled me. Cascading rocks, puffing volcanoes and painted mountain peaks competed with the city skyline for my gaze. My God, my Savior, crafted this engaging masterpiece! My attention returned to the wall. To trust was to live. Fear would not overpower my heart. Moderation meant death. I could either cling on to the rock with every ounce within me, or plummet to the ground.
For me, this was the consummate adventure, and it reminds me of how I want to live. I want to climb the daunting, painstaking, unknown will of God. I want to trust his vision for each foothold, for each grab. I want to rise to greater challenges, allowing my muscles to burn as they grow character and gain strength. Rather than allow my fears to overwhelm me, I want to steal glances at God’s creativity. I will not be content waiting on the ground, overcome by yesterday’s limitations.
My soul echoes David’s cry, “Teach me to do your will, for you are my God.”
We stand looking up at another year. This year can only be lived once. Let’s climb mountains. Let’s surrender all to God this year. Let’s cling to him for every step, trusting him to carry us into the unknown. Let’s take risks and face uncertainty clinging to God in faith. There is no assurance that this year will be easy, but it all comes with a promise: “I am the LORD your God who takes hold of your right hand and says to you, Do not fear; I will help you.” (Is. 41:13)
Happy New Year!
FacebookTweet