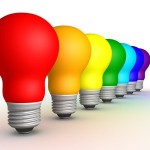 A Stolen Glimpse of Heaven

The project was about visual literacy. My professor had given us 10 words and we had to take one photo that represented each word; diffusion, economy, exaggeration, etc. The project due date was quickly approaching. I frantically searched my apartment for something to alleviate the assignment.

“Hmmm, boldness,” I thought as I considered the last word in need of fulfillment. My eye caught my roommate’s dying flowers moping in the corner. I snapped a photo. Not bold enough. Then, for some reason, instead of giving up on the dying flowers and moving on, I looked again. It was as if the flowers had whispered to me, “Can you really see no boldness in us?”

An unexpected, fierce determination arose within me. Could I bring this perishing beauty back to life? I held my camera beneath one of the wilting blossoms and blindly hit the shutter. Click. I glanced at the instant playback. Suddenly, I was obsessed with this photo. The world around me seemed to fade away. Engrossed in finding and revealing the character, meaning and beauty in that which had been disregarded as dead, I took photo after photo until I had liberated the flowers’ boldness and brought back to life its glorious beauty.

My understanding of reality had been altered. As if being reborn into a new world, I began seeing everything and everyone around me through different lenses. Assumptions demanded rediscovery. The ordinary begged to be unearthed. Could it be possible that I had been walking blind? Were there new ways to interpret each passing moment? Yes. I began to anticipate meaning where I had felt nothingness, hope where there had been impossibility. A new resolve erupted within me to reevaluate situations, relationships, and circumstances. The fusion of old ideas with new perspectives allowed me to reassess problems with expectation of fresh, innovative solutions. I embraced the challenge of seeing everything–creation, interactions, ideas–differently. There was new potential in the unexceptional. The unsolvable was now child’s play. The impossible had become a challenge to repossess hope.

I had caught a peek of the world through its Creator’s eyes. All of creation was demanding, screaming, begging to be redeemed. The death and resurrection of Jesus could no longer be seen in religious terms only. Life began rising victoriously out of death in the nuances and moments of my days.  I had stolen a stunning glimpse of heaven on earth, and I was enamored.

After submitting this project to my professor I promptly changed my major and reconsidered all of the lofty plans I had before me. I am convinced that God created me to look beyond that which is seen by the naked eye. He calls me to resurrect the new from the established. All tired assumptions demand to be challenged. The end result will be wholeness and redemption. I have become convinced that rebirth into life seen through the Creator’s eyes is the key to ending the cycles of poverty, eliminating corruption, bringing hope to the heart-broken, and peace to those in despair. With ideas as our medium and the world as our canvas, let us resolve to view the world with new eyes.

My mom has a copy of this photo framed in our house. Perhaps to another it’s just a flower, but to me, it changed everything.

“The creation waits in eager expectation for the sons of God to be revealed. For the creation was subjected to frustration, not by its own choice, but by the will of the one who subjected it, in hope that the creation itself will be liberated from its bondage to decay and brought into the glorious freedom of the children of God.” –Romans 8:19-21