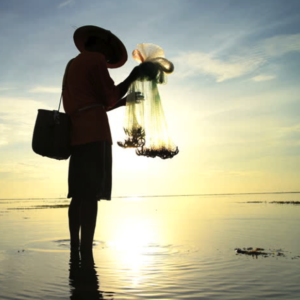 I have some friends serving in Asia and their minds are getting blown by how much God is moving there right now. Mine too.

Back in September, one of their local teammates was dropping off some ministry interns for a week of outreach in a city a couple of hours away from where they all live. This guy, I’ll call him Andy, walked over to a café to get some lunch and struck up a conversation with a likeable fellow they now call Murray. Andy being Andy, with a passion for Jesus and a knack for evangelism, soon shared the Gospel with Murray who was quite open and prayed right on the spot to accept Christ.

Andy asked Murray if he had any friends who would like to hear this good news, too. He talked about a couple of friends at work. Andy explained that it was Murray’s privilege to share his newfound faith with his friends, and the two of them made their way across town to meet with them. When they got there, instead of the Andy the Expert sharing the Gospel with these two friends, Murray did so himself, using the same simple, culturally-understandable way that Andy had just used on him. Even though Andy had provided the coaching on that, the message was coming straight from Andy’s heart to these two friends.

That part is key and I’ll come back to it.

Andy came back a week later to check on these guys, not knowing what to expect, and was pleasantly surprised. Not only were these three guys eager to learn more, but they had been sharing their faith with several more friends and had led some of them to Christ. Andy then led them in a Bible study to deepen the foundation of their new faith, focusing on the next step of baptism. The small group made their way to some nearby water and Andy baptized Murray. Then in the same way he had modeled evangelism, instead of Andy the Expert baptizing Murray’s two friends, Murray did so himself with a little coaching from Andy.

That part is also key, and I’ll come back to it.

It gets pretty crazy after this. These three guys basically started several groups that have in turn multiplied to well over 100 groups and rapidly counting, made up of new followers of Jesus. It’s going down several generational lines, as in one person comes to Christ and shares with more people who start their own groups, and on and on it goes. They are practicing obedience-based discipleship, meaning they study the commands of Jesus and hold each other accountable to obey them. They have experienced miracles and persecution. The Gospel is spreading like wildfire. It’s jumped over to nearby unreached ethnic groups. Reading my friends’ reports is almost like reading accounts from the book of Acts in the New Testament. Hugely inspiring for me.

Before I get to my main point, I need to give a big caveat here first. It’s very hard to reverse engineer a move of God. There are too many factors involved and too much mystery in the sovereignty of God. Maybe it was just this people group’s time and God moved in a sovereign way? Maybe intercessors we don’t know about, and never will until heaven, paved the way? How much was due to the “best practices” of these practitioners? They can’t say for sure. They feel like they have jumped on a train that has left the station, and they are thrilled to be on the ride. They would not dare said that their ministry principles led to this move of God. It’s just not that simple.

I can’t say what caused this growing movement, but I can point to one principle they have purposely tried to lay into the DNA of every new believer. It’s simply this: a follower of Jesus is fisher of men. Following Jesus means fishing for people, as Jesus said in Matthew 4:18 to His new followers: “And He said to them, ‘Follow Me, and I will make you fishers of men.’”

Jesus told His disciples this when they were just a few seconds old in the faith. He didn’t wait until they had advanced training before he launched them into kingdom adventures. It was on-the-go and just-in-time training. Fishing was imprinted into their DNA right from the beginning.

Andy and his partners share the Great Commission (Matthew 28:16-20) as often as they share the Gospel. They keep letting these new believers know that it’s a privilege and duty to share one’s faith with those who don’t yet know Christ, a value which is modeled and passed on down to the next generation.

I’m thinking now of my own North American context, where sharing your faith seems like a noble thing to do, for sure, but certainly not expected. Not something imprinted into our DNA as new believers typically. When I heard the Gospel, it was pretty much about me getting into heaven and having peace in my heart. I saw Jesus as the nice shepherd knocking on the door of my heart, but not the fisher of men beckoning me to come and follow Him on His mission to “seek and save the lost” (Luke 19:10). That stuff, the evangelism stuff, felt like kind of green beret stuff. I got my ticket to heaven, thank you very much, and I’ll leave the spreading of this message to the experts.

Andy didn’t pitch it that way—didn’t separate Gospel receiving with Gospel sowing. Following Jesus means fishing for the people that He loves. It’s not an extra add-on, but a privilege and duty built right into the DNA of every knew believer. These Asian newbies started sharing and baptizing immediately, and that has been one of the keys to this burgeoning movement.

There’s been a lot of research and discussion about the church in the U.S. being on the decline. The stats are alarming indeed. 73% of churches are in decline or plateaued. The fastest growing religious segment in the U.S. are the “nones,” meaning none-of-the above, the non-religiously affiliated. One-fifth of the U.S. public—and a third of adults under 30 —are religiously unaffiliated today, the highest percentages ever in Pew Research Center polling. Click here to read an insightful article by Ed Stetzer for more on this.

This decline is multi-faceted and complicated stuff and I’m not offering one simple solution. Just as I wouldn’t dare reverse engineer a move of God, I can’t say this one simple principle will do the trick to reverse the steep and rapid decline. But for people like me who love the Church and want to see it grow, recover and thrive, we do need to re-examine our Western experience of spectator sport Christianity. Maybe something we have forgotten along the way is so simple that we think, nah, surely that couldn’t be that important.

It may be simple, but it is profound, potent and powerful. A follower is a fisher.